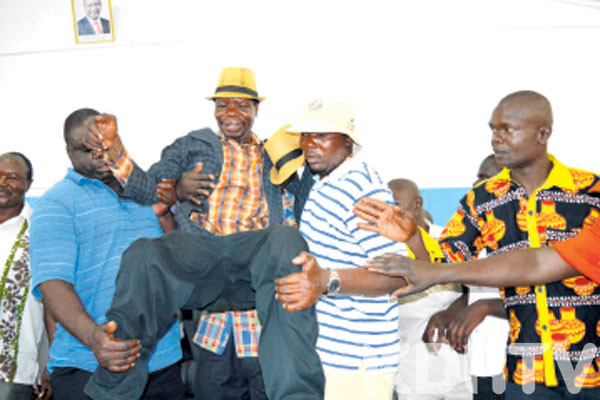 KDRTV-The Kakamega ODM Branch meeting was turned into a battle ground as some officials attending the meeting were  accused of colluding with the Deputy President William Ruto’s operatives in the region to wreck havoc the branch from within.

The meeting turned chaotic as some ODM Loyalists accused their counterparts of harboring mole like attitudes or behaviors and have been spotted with the Tanga Tanga Faction of the Jubilee Party in the region fronted by William Ruto to undermine the local and National leadership of their party.

The meeting was called upon to organize for the party’s grass root elections and before the meeting was even midway chaos erupted when the perceived moles were not given a chance to air their views prompting a bitter verbal exchange which degenerated into a physical confrontation.

Some ODM Loyalists who claims to be having the intelligence of the perceived moles were quick to unleash the accusations which didn’t go well with the accused who hit back by claiming innocence and loyalty to the branch officials and the ODM ideals but their accusers could hear none of this and a fight ensured.

No injuries were reported as the KDRTV News Crews had to run for their safety based on previous altercations which left many journalists injured and their equipment vandalized or broken.

No official communication has come from the local branch party’s secretariat which also boasts of having the Deputy party Leader who’s also the Governor of Kakamega County Hon. Wycliffe Ambetsa Oparanya.

The ODM Party has a massive following in the former Western Province which has four counties namely Busia, Kakamega, Busia and Bungoma.

During the General elections, Jubilee party managed to get pockets of Parliamentary positions in Mumias represented by Hon.Washiali , Mumias East Constituency, and Emanuel Wangwe from Navakholo.

In total Jubilee got four seats in Kakamega county namely Mumias East, Navakholo, Malava, and Ikolomani , while Webuye is also  represented by Didmus Baraza a staunch ally and supporter of William Ruto.

Subscribe to watch latests videos
In this article:Chaos in ODM, Headlines, Raila Odinga