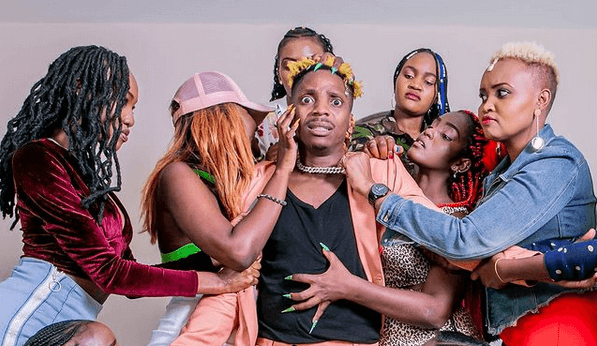 Eric Omondi and his Girls

(KDRTV) – Kenya Film and Classification Board (KFCB) CEO Ezekiel Mutua has called for the immediate arrest of comedian Eric Omondi over what he termed as sexually abusing young girls in his controversial ‘Wife Material’ show.

The moral cop questioned why the comedian is kissing all the girls on the show especially in the midst of the COVID-19 pandemic. Mutua also called on authorities to investigate Eric Omondi’s Big Tyme Entertainment studios, saying it is just a hyped brothel where girls are molested in the name of art.

“The facility in Lavington that was opened with hype ostensibly as a studio is nothing short of a brothel. It’s a place where girls are being sexually abused and degraded in the name of art. The DCI should immediately move into that brothel in Lavington and arrest the criminals doing these things to our girls in the name of art!” Mutua said at the same time questioning how low the Kenyan society has sunk morally.

Eric Omondi’s Wife Material show has been criticized for its high sexual content. The comedian invited nine girls to compete on who should become his wife. He has been going on dates with the girls and sometimes performing explicit acts with them.

There was drama this week when Gospel musician Rington managed to convince one of the girls to ditch the show in exchange for a Ksh 100,00 reward to start a business.

On Wednesday, Eric announced Carol Kamweru of Band Beca as the winner of the show, saying they will get married soon.

“You are an AMAZING woman! Beautiful Inside and out. I can’t wait to spend the rest of my life with you and make beautiful babies. I am the luckiest man on this planet,” Eric said in a statement.

Critics claim the show was ended prematurely over criticism.