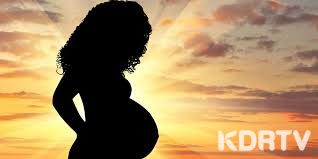 A Nyeri High Court has sentenced a 28 year old pregnant woman to 30 years behind bars  for killing her drunk husband after an intense altercation.

Emily Mukiri was sentenced today after pleading guilty for manslaughter, with the aim of having her sentence lessened.

According to the information gathered, the two were a couple living in Tetu sub-County before the husband returned home from a drinking spree and started the violent altercation that led to his death.

The evidence by the court revealed that Emily following the domestic quarrel unleashed a knife and stabbed him on the face and abdomen and left on the floor bleeding.

It is also confirmed that the wife after assaulting the husband went to the nearest shopping center and started a confrontation and behaving disorderly.

It was at that point that the police were called and she was arrested and taken to the police cell.

The police station commander attested to have made a call to the husband asking him to bail out his wife for disorderly conduct, and it was then that they discovered the husband had been assaulted by the wife before proceeding to the shopping center to create a scene.

The police officers rushed to the deceased house and took him to Nyeri County Referal Hospital where he succumbed due to the deep injuries inflicted as well as loss of blood.

The case was an intense one, as both parties lawyers’ tried to counter attack any forms of information presented in court.

Emily’s lawyer produced evidences and scenarios indicating battery and violence where she had been continuously assaulted.

Ideally, the history of the deceased husband indicated he was a drug abuser that would often lose his cool and do stupid things, more so he was a Miraa Seller.

Emily thus presented her case through her lawyer as though she was tired of being battered and violated for a longer period of time and had finally reached her final.

Although the law of Kenya does not advocate for taking matter into one’s hands nor ignorance as an excuse, she received a lighter sentence than previously presented.

Her lawyers pleaded with the prosecution for the charge to be changed from murder to manslaughter hence a lesser sentence.

Emily is thus most likely to have her child in jail and miss 30 years of its life locked behind bars.