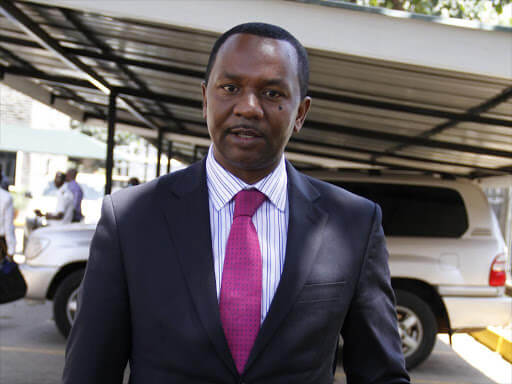 (KDRTV) – Former Dagoretti South MP Dennis Waweru has emerged as an early favorite to be the next Nairobi Governor, following Thursday’s impeachment of Mike Sonko.

Waweru, a co-chair of the BBI Secretariat (together with Suna East MP Junet Mohammed) is hoping that his candidature can be supported by both President Uhuru Kenyatta and ODM leader Raila Odinga.

On December 4, just a day after the Nairobi County Assembly had impeached Sonko, Waweru stated that Nairobi needs a handshake government and that he has demonstrated (with the record collection of 5 million BBI signatures) that he is equal to the task.

“We have seen the clouds gathering in Nairobi. Even in Nairobi, we need to have a handshake team working together. And now that I have passed the exams, nimetosha,” Waweru said.

Hapa Nairobi County tunaona mawingu, we need handshake team working together, and because I have passed the interview now, nafikiri nimetosha. pic.twitter.com/DXtSu2khCr

Jubilee and ODM have been co-operating on several fronts since the March 2018 handshake between President Uhuru Kenyatta and Raila Odinga.

In August, the two parties agreed to have a Jubilee speaker who would be deputized by an ODM MCA in the Nairobi County Assembly. MCAs from both parties unanimously voted for Benson Mutura as the assembly speaker following the resignation of Beatrice Elachi.

There has been speculation that the two parties may field one candidate in the Nairobi Gubernatorial by-elections scheduled for early next year.

Waweru was firmly in the gubernatorial race in the 2017 elections but dropped out in the last minute, leaving Sonko to battle it out with Evans Kidero and Peter Kenneth.

It is not clear if Peter Kenneth, who is also close to both Uhuru and Raila will vie in the elections.