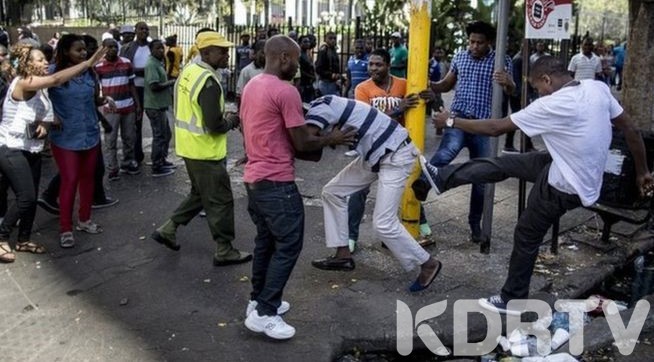 The recent images and videos depicting the xenophobia attacks in South Africa has angered majority of people, some who took to social media to express their disappointments.

Going by the video of a young man probably in his early thirties, the intensity of the violence is incorrigible as he was burnt alive with a crowd of onlookers cheering and gearing.

The local media has portrayed the fresh violence as ignited in Johannesburg its capital and so far three people have been reported dead, while several others in critical conditions and running for their lives.

Nigeria has been the most hit in this violence, as the campaign pledge was to kick foreigners especially Nigerians out of their country.

“Nigerians are the biggest scammers in the world, dealing with different types of frauds and extorting people their hard earned money. It is time to teach them a lesson and have them flogged out of our country,” read a tweet.

Majority of Nigerian celebrities have taken to social media to condemn the acts, while others urged their government to take charge and ensure the safety of their people.

One renowned South African Politician and Opposition Leader Julius Malema condemned the acts of violence and urged South Africans to embrace togetherness since they were all Africans.

“When it is a white person in South Africa they are called investors including the Chinese and Indians. When it is Africa, we use violence…self-hate must come to an end and we must embrace each other as one. Nigerians are our brothers, let us be tolerant,” said Malema.

Xenophobia is such an outdated practice that was done away with in the earlier years.

South Africa has battled and struggled with apartheid for the longest time, where they were racially segregated and divided amongst themselves.

They were ruled by the minority whites who subjected them to torture and inequality.

Former South African President Nelson Mandela fought so hard against this, and it is disheartening to find the said people do the exact things to fellow Africans.

The Nigeria State and Government has been numb about the happenings, with zero progress to ensure the safety of its people in foreign countries.

This is shameful South Africa is getting worse .this is happening in front of police #Xenophobia pic.twitter.com/7KvPoCE734

Nigerians have ideally called on all its people to boycott South African products including DStv in a bid to send a message and secure the safety of their people.

“Our government is very quiet about these attacks yet we elected them to protect us as a people. let us boycott all South African products and secure the well-being of our people,” said a twitter user.