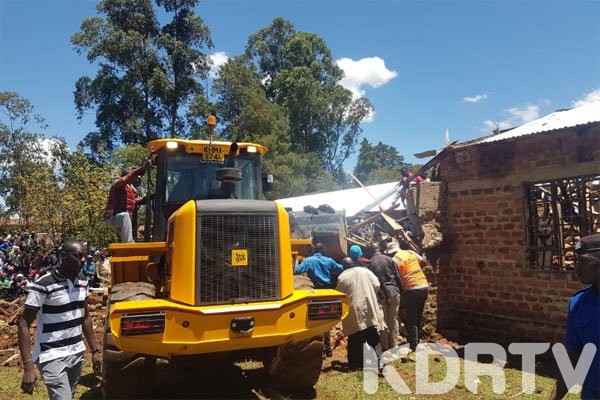 A building under construction collapsed on Thursday in Malava, Kakamega County burying the construction workers underneath.

The building which collapsed at around 9.00AM, was constructed without legal permits and the owner accused of defying the National Construction Authority (NCA) warning against going on with the construction.

According to the NCA officers, the building had been reported to be faulty a few weeks back by concerned residents and they made an impromptu search to and stopped the operation from going on.

However, the owner defied their threats and went ahead to start the construction that has seen to it two people dead and others injured.

One person died on the spot while the other who is believed to be a woman selling tea has not been found, with her cell phone unreachable.

“A woman who sells tea at the construction was making calls saying that she was trapped inside the building. However her phone went silent and we haven’t seen her rescued,” said Wilbroda Sindani.

The county executives were blamed by the residents claiming they had alerted them of an impending disaster and all they did was show up at the site, take bribe and disappear.

Pauline Dolla who arrived at the scene immediately after the incident urged residents to remain calm while investigations were being carried out with intense actions to be taken against the owner of the construction.

“I would like to assure you that we are going to investigate this incident and have the owner of the building arrested and prosecuted if it is true he violated the stipulated rules of construction. You don’t need to be an expert to understand that this building was sub-standard,” Said Dolla.

The owner of the construction has since disappeared without a trace with the police intensifying search to have her answerable.

.@EMS_Kenya ambulance on the ground.