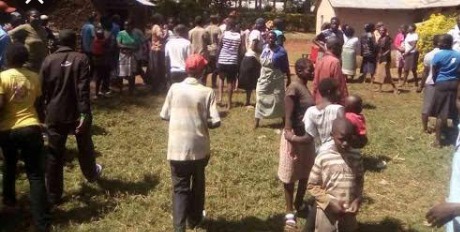 A 46-year-old man in Namakhele village, Kabuchai constituency, Bungoma County left residents in shock after opting to dig his own grave and later commit suicide to avoid paying a Ksh 15,000 debt.

Martin Juma confessed that he wanted to commit suicide because he owes different people in the area money and they were pestering him to pay up.

Juma, who is jobless, said that he therefore saw no point in being alive a reason why he opted to dig his own grave and take his life.

The incident attracted a huge crowd of locals comes only a few days after a middle-aged man in the same location slaughtered a cow and drank its blood then disappeared.

Area Chief Bonface Ndiera, who rushed to the area after word reached him, said that such cases have been on the rise in the area and asked pastors to intervene and pray for the area residents’ deliverance.

Kizito Lukorito, an elder, said that according to the Luhya customs when a person is found digging his own grave he should be severely beaten and a black sheep slaughtered to cleanse bad spirits before a banana trunk is buried in the grave.

“If the above custom is not performed, then the family risks losing a close family member,” he said.