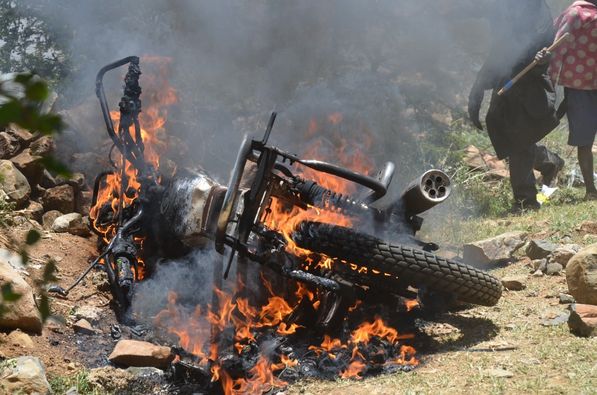 Motorbike being burned during violence in Laikipia

KDRTV NAIROBI: Chaotic incidences have been reported in In Rumuruti, Laikipia, after locals clashed with herders.

During the violent clash, the motor was burned while locals could be seen blocking various roads.

Suspected bandits in the area compromised security that led to the closure of several schools.

Many people were killed during the attack by the bandits, who also burned several homes and schools.

Thousands had also been displaced, and the govermened pledged to afford them humanitarian support.

The government sent police officers to restore security and peace in the area.

KDRTV has received reports that several police officers lost their lives during a confrontation with armed bandits in the area.

Since established a multi-agency force, the government incorporated military officers to help beef up security in the area.

The government ordered schools in the area to resume operations as many security personnel was sent to Laikipia.

There are several steps that the government has taken to ensure the security of teachers and learners in the area; they have set several police stations and held consultative meetings to help unite the communities in the area.

Despite the announcement by the government for schools to resume learning, many schools remained closed by Tuesday.

This despises the heavy presence of police officers in the area.

The government also established the elite police training base in the areas to restore security in the area.

Despite the heavy security presence, KDRTV established that locals engaged herders in a violent confrontation on Tuesday.