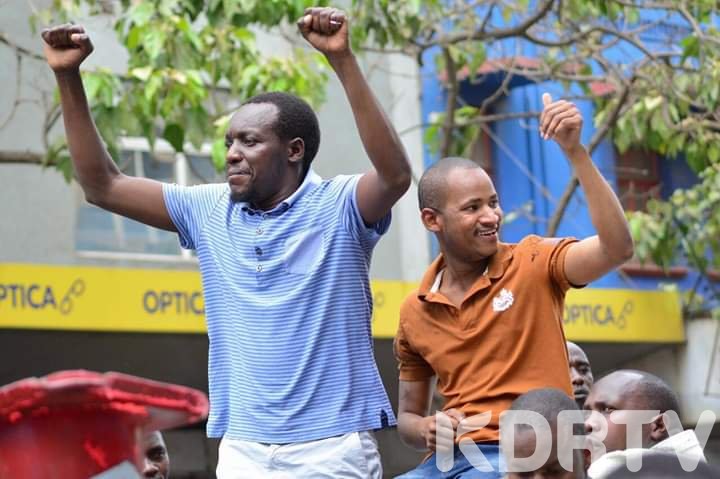 The Star Newspaper, in their corridors of power segment, has claimed that an unnamed ODM luminary received a huge paycheck from Mariga’s camp with the promise of delivering a favourable outcome for the former Harambee Stars midfielder.

Though it didn’t reveal the name of the said politician, The Star described him as a vocal and controversial lawmaker. The report said that the MP took cover after he realised that the tide was too strong in the race. It claimed that he feigned sickness in the dying days of the campaigns and failed to appear in the final rallies.

And now blogger Kenneth Ojuok has claimed that the said politician is Babu Owino. The blogger asked Babu to return the money he took from Tanga tanga and all his problems will be over.

Ojuok’s claims came in the aftermath of Babu claiming that his life is in danger as powerful people want to kill him. He said he had recorded a statement at Parliament Police Station. Could these powerful people be the ones he double-crossed?

Babu Owino should just return the money he took from Tanga Tanga battalion and all his problems will be over. Double crossing is a serious crime in politics. pic.twitter.com/SbU882KcK7

It is true that Babu was hospitalized during the last days of the Kibra Campaigns. The first time MP shared pictures of himself in a hospital bed asking God to heal him because he must lead the nation one day.

May God heal me coz I must lead this nation some day pic.twitter.com/BI9CqvW0MF

Despite him not attending ODM’s last campaign rally in Kibra, Babu camped in the constituency on the election day, helping to ensure that the Tangatanga team could not bribe voters.


Babu played a critical role in Imran’s campaigns as he is the one who coined the slogan ‘Kibra ni bedroom ya Baba’ which went viral and rallied many people into the ODM voter basket. He also publicly attacked both Mariga and DP William Ruto, the man who sponsored Mariga.

After the elections, Babu has remained vocal on the importance of Imran’s win and why Ruto should respect Raila.

Could such a man be a mole?