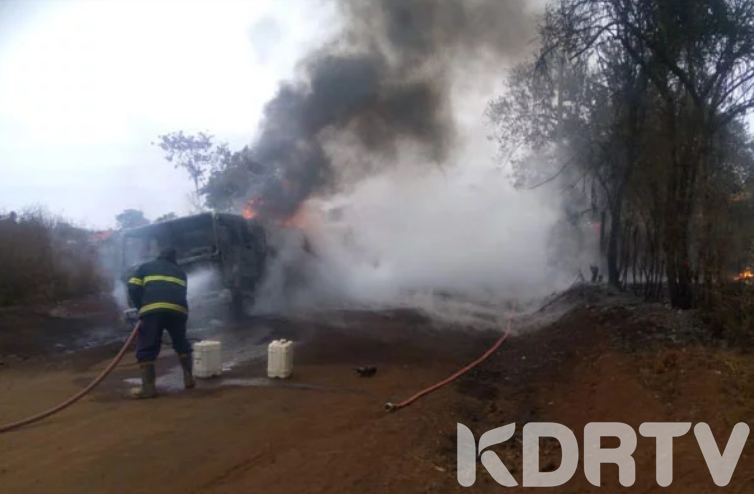 The tanker which burst into flames. /Courtesy

Police officers have applauded a brave tanker driver who boldly drove away a tanker moments after it burst into flames, saving many people from the inferno.

Led by the area police boss Ahmed Mohammed, the officers praised the driver for his courage.

The tanker’s driver, James Mugo, is stated to have drove the vehicle, which was engulfed by fire to a nearby forest to avoid a disaster.

Luckily, he managed to jump out of the vehicle escaping unhurt.

The tanker was emptying fuel at a local petrol station when Mr Mugo noticed a thick smoke coming from the vehicle.

Upon sensing danger, he drove towards the forest before jumping out of the vehicle

As the tanker burst into flames, the panic-stricken residents fled in different directions to avoid being hurt.

The Embu County rescue team managed to arrive moments later to put out the inferno.

Joining the officers, residents noted that the lorry, which was carrying 8000 liters of fuel, could have killed scores of people had the driver not taken the bold step.

Officer Mohammed further mentioned that an investigation has commenced to establish the cause of the fire.

Subscribe to watch latests videos
In this article:Embu County