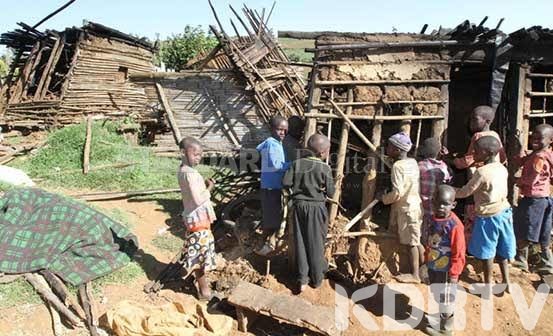 Police officers in Rift valley have descended upon a camp at Itare Dam Kuresoi South and demolished structures leaving the residents displaced and homeless.

It is believed that the demolitions began at the wee hours of the morning, with heavily armed police officers storming the place and commanding the locals to vacate, failure of which was met by unexplained destruction.

Ideally, the locals had lived in the place since 2017 and were considered Internally Displaced People (IDPs) after the intense election that ensued.

“We were ambushed by heavily guarded men in police attire who gave no instructions apart from commanding us to gather out belonging and flee,” said Simon Cheruiyot a local in the area.

READ ALSO: Night in Cold Due to Evictions.

The images from the scenes as circulated on social media were very disturbing as nothing was literally spared.

Although the camp was filled with temporary houses and shelters, they were destroyed to no recognition and the few who played tough had there belonging including clothes and house hold items destroyed and confiscated.

There has been no official word from the Rift Valley police or authority, although it has been rumored that the order came from someone powerful who wanted the IDPs frantically flagged out of the premise.

Ideally, a source close to KDRTV revealed that some of the people residing at the camp had previously been requested to leave the place and return to their homes since there was no longer violence or disputes but they declined and wanted compensation.

This angered the authorities hence they opted for the move to have the people flogged off.

“The people had been asked to vacate here earlier and given options to return to their homes. They however failed to agree to the set terms and the only possible way was to flog them out and create space for the land,” said an anonymous person.

Demolitions and evacuations have been very rampant in the country for the past one year, with some of the most renowned buildings being brought down.

Currently in Kisumu, many buildings are facing demolitions to pave way for the expansion of Kisumu Port that arose due to the handshake between NASA Leader Raila Odinga and President Uhuru kenyatta.

As much as demolitions are often painted for a good course, the government should prepare people well enough before ambushing them in the middle of the night, with police and heavy machinery.