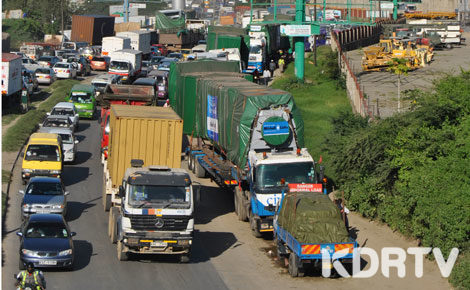 It was a hell of a night after motorists were left stranded forced to spend the night in the cold along Nairobi- Nakuru Highway.

There was a massive traffic gridlock at Gilgil where all vehicles using the same direction were forced to make an immediate hault and wait for the traffic to be eased.

According to the drivers operating that route, the gridlock was worsened by the closure of a truck line at the weighbridge forcing all vehicles to use one lane.

Ideally, the road is encumbered by road works that are incomplete hence inconveniences transport.

Traffic congestion is not a recent problem in the country, it is actually a menace that has terrorized the country in different cities.

It has affected movement in major cities in the country leading to lateness and slowness.

One of the major causes of traffic jam is overlapping and switching on wrong lanes.

At the same time, as much as the government is to be blamed, most drivers and motorists are at fault.

They tend to be impatient and fail to follow simple traffic rules such as driving in one lane.

The breach of these rules are what culminate into worse cases such as the gridlock.

According to the police boss of the area Mr. Opuru, the cause of the traffic tailback was due to motorists who were in a hurry and impatient hence overlapped and used wrong lanes and worsening the situation.

“Some of the motorists were on the wrong lane while others used adjacent roads that in turn worsened the state of transport.”

Although the better part of the night was spent in clearing the traffic, the process ran until morning, with deployment of more officers.

At this time, many of the passengers’ plans had already been inconvenienced.