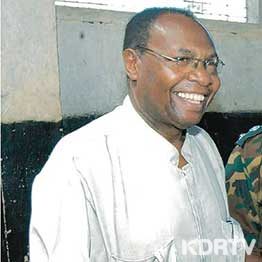 Dr Hezron Manduku aged 79, former minister for Foreign Affairs and one of the country’s pioneer medical entrepreneurs passed on at around 9 p.m Saturday evening at a Nairobi Hospital after a long illness.

Family spokesman Jeremiah Matagaro, in a press release, said the body of Dr. Manduku has since been transferred to the Lee Funeral Home.

His elder brother, speaking at the late Manduku’s rural home in Nyaturago, said the community had lost a visionary leader who inspired a lot of people both young and old.

The MP was a career doctor before going into elective politics, having worked at various hospitals in Nairobi, Kakamega and Meru.

“He will be remembered for coming up with Hema Hospital, one of the biggest private hospitals in the region at a time members of the community could travel long distance to seek health services.” said the Kisii Deputy Governor Dr Joash Maangi

The deceased was first elected in 1992 and served as Nyaribari Masaba MP for two terms after beating out current Kisii County Senator Prof. Sam Ongeri.

He was later appointed Assistant Minister of Foreign Affairs.

He then left the Government job and ventured into private medical practice. He has been running the giant Hema Hospital and Keroka Nursing and Maternity Home.