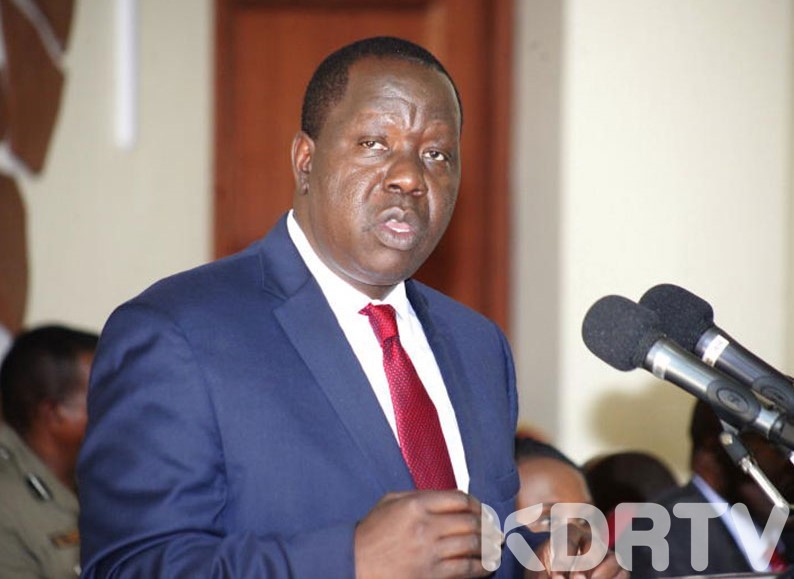 It is without a doubt that Interior CS Fred Matiangi’s work ethic and code of conduct is exemplary and unique.

He came into the lime light after the 2015 cabinet reshuffle by the President, making him the Cabinet secretary for Education and rose to power as currently the most powerful minister in history, taking over tasks and orders while reporting directly to the President Uhuru.

The president has charged the CS’s power by handing him the task of delivering national priorities and flagship programs. This order had been issued in the beginning of the year, but made effective yesterday.

The order merged the two departments and made the Interior CS the head in a bid to foresee government projects and developments.

President Uhuru Kenyatta, having lost faith in his Deputy William Ruto, has officially handed over 50% of his duties to CS Fred Matiang'i. As a super minister, Matiangi will now chair cabinet. The rest of 50% tasks remains with Uhuru and his brother Raila. Kazi kwisha pic.twitter.com/B1EaTlprgc

This has never happened in history thus rendering the CS as the most powerful one.

He is basically acting as a Prime minister whose role is to foresee and be the oversight.

This hefty move grants Matiang’i of powers to initiate, launch and supervise government projects and developments.

This is part of the Deputy President’s job, who is second in command from the president.

Ruto’s team has termed the interior CS’s elevation as a foul plot to scatter his presidential bit come 2022.

Previous reports tabled indicated that the elevation of the CS into having more powers did not go well with the team Tanga tanga.

Ideally, some of the MPs allied to Ruto have on some instances failed to attend meetings chaired by him.

This indicates the tension he has brought at the camp, between the two teams although it has been publicly denied.

Yesterday’s realignment of executives also saw the irrigation department being curved from the agriculture ministry and into water headed by Simon Chelugui.

Although some of the ministers argued that the change was effective and put things where it should have been initially, some were not in full support of it.

“To enhance collegiality within the water sector, the irrigation department has been merged with the ministry of water and sanitation. This unveils the ministry of Water, Irrigation and Sanitation that is part of the big four agendas to be realized during my term,’ said President Uhuru.

Matiang’i has ideally been vocal about the National Cohesion movement speared through the Building Bridges Initiative.

This is something that Deputy President Ruto has been opposed to, stating that it was a waste of tax payers money and against the constitution.

Despite Matiang’i being an operative CS focused on implementations, his role is not well accepted by some people in government as they associate him with 2022 elections.