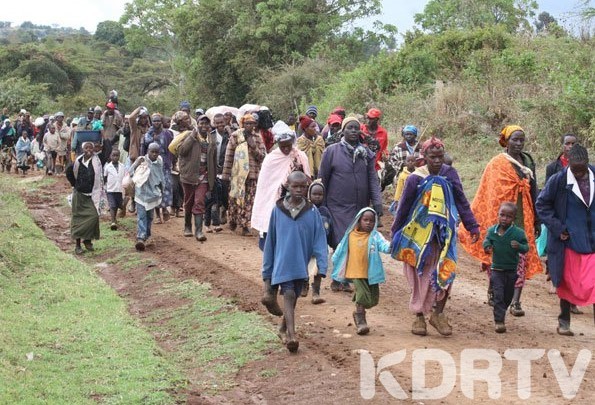 The government has gone back on its decision to have all schools within Mau forest shut down to pave way for phase 2 of the Mau evictions.

This comes after MPs summoned the Environment and Forestry CS Keriako Tobiko to parliament to shade more light on the underlying issues.

According to Nakuru County Commissioner Erastus Mbui, the decision had been reversed to pave way for learners who were supposed to resume their third term without any forms of disruption.

“The Government has looked at the decision to have schools shut down and noticed it will harm the pupils. Therefore, in the interests of the children, they are allowed to report back to school for their third term and complete examinations without any form of disruption,” said Mbui.

Earlier last month, tension was very high regarding the commencement of phase two of the Mau Evictions.

The government had issued an ultimatum for the people who resided in the forest to relocate before the crackdown began.

Although the process has been stumbled by several challenges, the eviction process is expected to begin in 60 days, where all residents will be flashed out.

Initially, the government through Rift Valley Regional Commissioner George Natembeya had ordered the closure of 15 schools in the looming evictions.

This directive was opposed by some of the leaders from the rift valley, terming it a disruption of learning activities.

Apparently, about 10,000 families and 3000 children are bound to be displaced in case the evictions are kept forward.

Yesterday, an MP together with two MCAs were arrested with causing disturbances and inciting the public against the planned evictions.

Led by the most vocal Elgeiyo Marakwet Senator Kipchumba Murkomen and other leaders, they urged the government to shove the evictions agenda aside and put into consideration the lives of school going children who are expected to sit for their exams.

“Environment and Forestry CS Tobiko plans to evict people without following the law. There will be no evicts until the President speaks on it and our children will continue going to school like any other children in Kenya,” said Murkomen through his Twitter account.

The Mau evictions has put leaders to shame for having failed to keep their mandate after being elected in office.

The leaders were elected to protect its people and their interests, however, majority of them are now silent about the planned evictions, yet the people that gave them the power suffering under harsh conditions.

The Government will be closing 15 primary schools that were built in the Mau Forest at a cost of Sh60 million.https://t.co/t8tS7ZamJ5

Rift Valley Regional Commissioner George Natembeya has reversed the order to shut down 15 schools at the section targeted for evictions in Maasai Mau forest. #hela pic.twitter.com/74HbQvearh

The DP William Ruto is among the leaders that have been very numb on the matter despite coming from the Rift region.