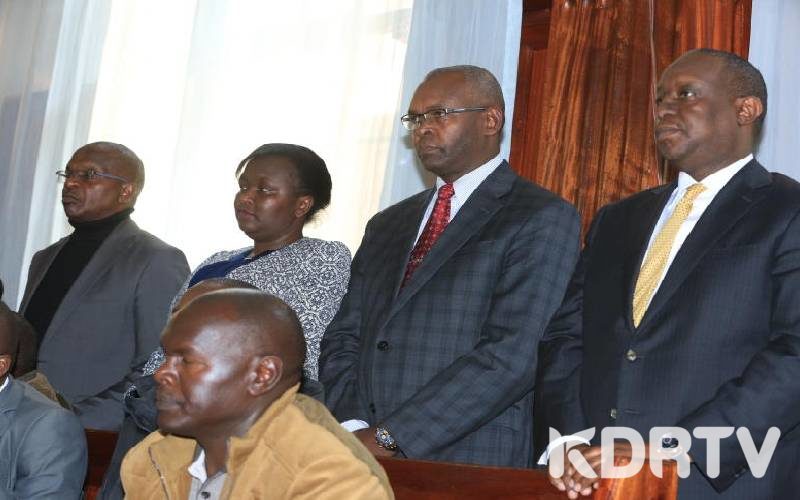 National Treasury CS Henry Rotich and  Permanent Secretary Kamau Thugge smacked with a  r Sh15 million cash bail after being arraigned at Milimani Law Courts over multi-billion Arror and Kimwarer dams scandal. The two, alongside others were appearing before Chief Magistrate Douglas Ogoti at Milimani Law Courts in Nairobi.

The cash bail terms were heavy to an extent the defence team lawyer Kioko Kilukumi requested the court to release the suspects on bail on reasonable terms under the law. He said that suspects were entitled to bail unless there are compelling reasons to deny them. Kilukumi argued  CS Rotich had co-operated with the law enforcers and had met the requirements of a suspect being investigated.

Others released on cash bail were PS Susan Koech (6M), the tender committee members for the dams projects and Nema director general Geoffrey Wakhungu were released on Sh750,000 bail.

“Most of the Kerio Valley Development Authority staff are very junior employees. Please don’t generalise their situation, some of them are really junior staff,” said  Lawyer Kipchumba Murkomen, who was part of the defence team.

Lawyer Katwa Kigen, appearing for former Kerio Valley Development Authority Director David Kimosop requested the court allow him more time to present his client for plea taking because he had travelled outside the country.“David Kisosop travelled to Congo and he was supposed to have landed on Saturday. I requested him to come earlier and he said that by Thursday he shall have landed. I am requesting to present him on Friday for the plea,” said Kigen.