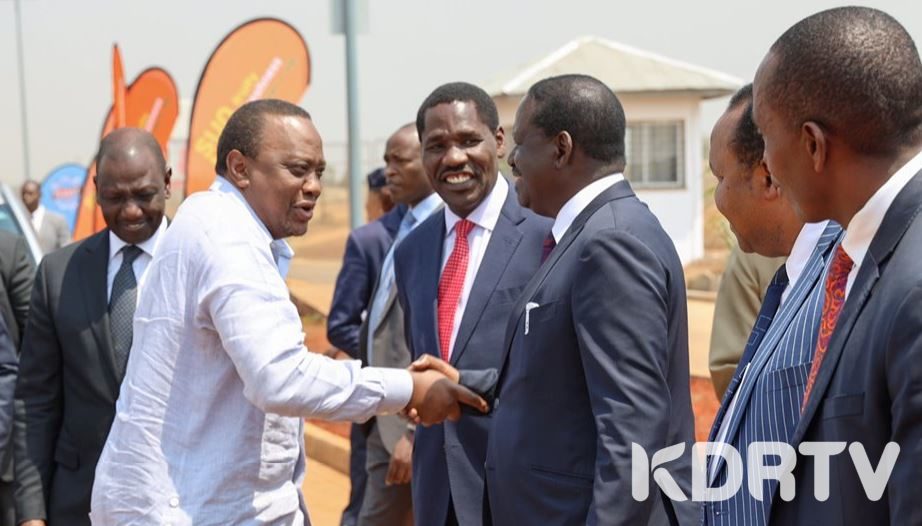 President Uhuru Kenyatta is not keen to endorse anyone for presidency if his statements are anything to go by today.The head of state who was speaking in Kiambu County gave yet another indication of his reluctance to go by the promise he had made that once he finishes his 10 year term, he will hand over the next 10 years to Ruto.

”Uongozi itakuja na ni Mungu ndiyo anapatiana uongozi. Uchaguzi itakuja na kuisha. Hakuna haja kuchochea waKenya kila wakati siasa siasa (Leadership will come and go and it is God who determines leaders. Elections will come and go. There is no need to incite Kenyans with politics all the time,” he said.

Uhuru also reminded leaders stop contant politicking and focus on working for the mwananchi. He even told the public to demand for  the leaders they elected in office to offer service delivery instead of engaging in endless campaigns. He reminded leaders present that it is only God who knows who the next president of Kenya will be.


“Mnajuaje nani ni Rais, Mungu tu ndiye anajua (How do you know who will be President? Only God knows),” Uhuru said.

READ ALSO: Doctor Hospitalized After Attending to Patient who Died.

Uhuru  who spoke on Thursday during the opening of the Bidco Industrial Park in Ruiru also hailed the project by Bidco saying it will create enough opportunities for the youth.

“The park we are launching today sits well in country’s agenda of creating jobs and increasing manufacturing sector contribution to our economy from the current 8.4 per cent to 15 per cent over the medium term,” President Uhuru said.