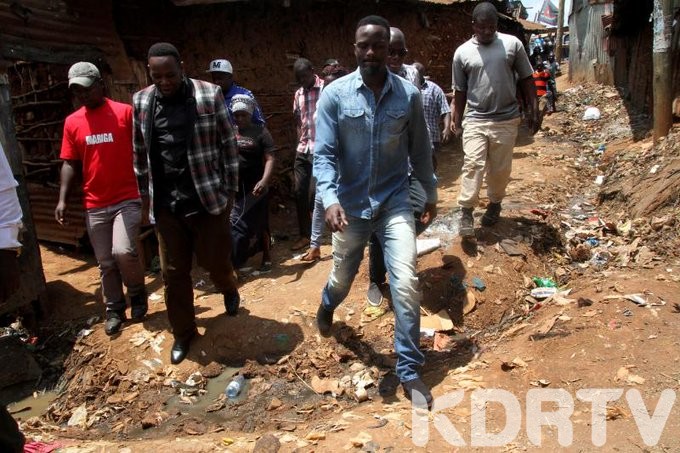 Jubilee flag bearer McDonald Mariga has asked Kibra residents to put their trust in him and elect him as their next MP so as to witness development and change of lives.

According to Mariga, the Kibra residents have been under the bondage of opposition which is the ODM and there is nothing to show for all their years in power.

He urged the resident to dump the ODM party and vote for him as a continuation of Okoth’s legacy in building schools, hospitals and improving the living standards.

“Kibra has been under the opposition subjugation for too long and it is time for change. Voting for me means that development is continued and Okoth’s legacy lived on,” said Mariga while attending a church service in the region.

Mariga also unleashed dissatisfaction in the poor sanitation and housing in the region, blaming the ODM party for the state of events.

According to Mariga, the opposition had been in charge of the region for decades yet the conditions of residents are wanting.

The Kibra seat went vacant after the Late Ken Okoth succumbed to cancer last month after years of battling it out.

Mariga’s candidature as the Jubilee party flag bearer has been very controversial encumbered with IEBC and legal battles.

READ ALSO: DP Ruto Left With Rotten Egg On His Face As His Plan To Fight Raila In Kibra Dies Before Take Off

Before the tenure of the Late Ken Okoth, Kibra was Raila Odinga’s strong hold which he was forced to surrender after running for presidency in 2013.

Years on, the region is still suffering under same challenges of poor sanitation, slums and unemployment. Mariga’s agenda is to win the hearts of the people and initiate the changes that haven’t existed in the past years.

Mariga has urged Kibra residents to vote for Jubilee in the by-election to free themselves from the "bondage of the opposition". https://t.co/PZdeJKnIXp

“I am not saying that I am the best but the changes will speak for themselves. It is for the people of Kibra to choose and I will not disappoint,” said Mariga.