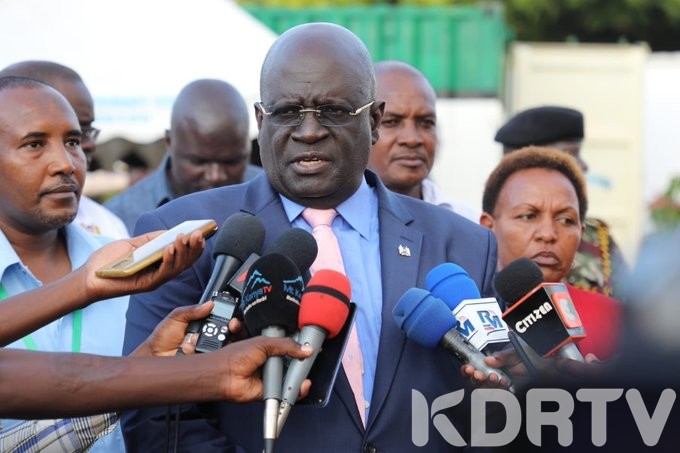 Education CS George Magoha has warned KCPE Candidates not to cheat in the exams starting this morning because anyone who attempts to cheat will be caught.

While addressing the media in Mombasa on Monday morning, Magoha said that the ministry has identified some hot spot areas that are likely to indulge in exam irregularities.

‘There are hot spots and the epicentre is in Migori, Kisii and Homa Bay. We also have problems in Garissa, Mandera and Wajir,’ he said.

CS Magoha: As per last year’s exam, there are ‘hotspots’ and the epicenter is Migori, Kisii and Homa Bay. We are not trying to scare the children but if you try, we shall catch you #KCPE2019#DayBreak
@Zindzi_K
@SamGituku pic.twitter.com/sisXhtmNvK

Several CSs are in different parts of the country to supervise the three-day exam that starts with Maths. Interior CS Fred Matiang’i was in Nakuru County while his ICT counterpart Joe Mucheru was in Nyeri.

Dr. @FredMatiangi on location at the Gilgil DCC's Office to oversee the opening of a container in readiness for the #KCPE2019 Examinations. He wished everyone sitting their exams success and assured parents and confirmed security had been beefed up country wide. pic.twitter.com/AcHYz0h5G1

Speaking from Kisumu, Education PS Belio Kipsang said that there is no need for pupils to cheat in the exams since all of them will be absorbed into secondary schools.

CS Mucheru: We do not expect any malpractice during the exam period. We expect that with the 100%, all children are assured of a position in Form 1 so there is really nothing much to fight about #KCPE2019#DayBreak
@Zindzi_K
@SamGituku pic.twitter.com/Q44BTQwZu9

Magoha assured Kenyans that all candidates will sit for exams wherever they are. He revealed that the ministry has 10 helicopters to take the papers to remote locations.

CS Magoha: We have helicopters which can lift exams to where they are required. I want to assure the nation every child will sit for their #KCPE2019 exams today.#GetTheWholeStory pic.twitter.com/KdNAr5BaWj

“We shall still take the exam to those in hospitals so that those who are sick and/or pregnant can still do the exam,” Magoha said.

Meanwhile, President Uhuru Kenyatta has led Kenyans in wishing the candidates success in the exams. He told the candidates that he believes in their abilities and he knows they have what it takes to succeed.