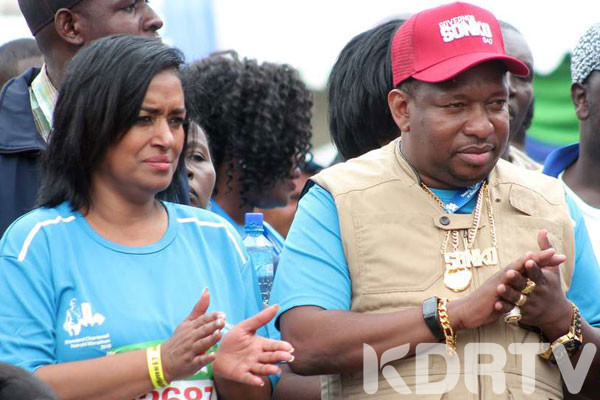 In June this year, a bitter feud ensued between Sonko and Passaris during the Madaraka Day Celebrations in Makadara. Sonko read the riot act to the MP after she asked the governor to respect other elected leaders in Nairobi.

The feud took a nasty turn after Sonko leaked audio revealing a phone call conversation with Passaris. In the audio, the MP asks for Ksh 1 Million because she was to go see ‘Baba’. This allegedly happened in the runner up to the 2017 general elections.

“I went for a strategy meeting and I was given some strategy which I told Baba (Odinga) to use… and Baba listened to me. He used the strategy at the Jakaranda, okay? And Baba has already told someone, a relative of his, that this one is now going to be my kingpin in Nairobi… so tomorrow at seven o’clock we are going to see him (Odinga)… I want to go with at least a million, everybody is going with Sh 500,000, but me I do not have the money…” the woman (Passaris) said in the audio that was first shared online by blogger Robert Alai.

Sonko promised to give Passaris Ksh500,000, money which was to be collected by her Personal Assistant on identified as Bush.

However, Passaris denied claims that she asked for money from Sonko. She said her voice could have been’ photoshopped’

“In this era of voice impersonation, you honestly believe that was me? Get a life. For your information. Baba doesn’t need 1 m to see him. Come we go visit him together bare hands. In this digital era it will be misleading to believe all you come across,” Passaris said on her Twitter handle.

You conclude that was me? In this era of voice impersonation you honestly believe that was me? Get a life. For your information. Baba doesn't need 1 m to see him. Come we go visit him together bare hands. In this digital era it will be misleading to believe all you come across. https://t.co/kA0fc7oN0i

Kenyans have questioned the MP after she came to the governor’s defence following his dramatic arrest on Friday last week. Despite their differences, Passaris said that Sonko ought to have been treated with dignity.

I'm sorry for what you endured. Two wrongs never make a right. His experience might humble him & make him feel the pain you & others endured. Having said that, the undignified handling of our citizens & leaders should not be condoned. Human rights should never be compromised. https://t.co/kpwnozGZsO

Some of her followers alleged that she might be siding with Sonko because she was paid the Ksh 500,000. It is these allegations which prompted her to give the above clarification.

Governor Mike Sonko will know his fate today as the court is set to make a ruling on his bail application.