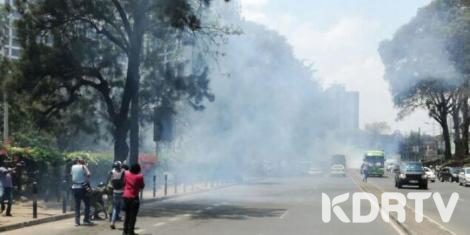 Kangemi youths in Nairobi gave the police a hard time on Thursday after they staged protests all over the region against the recruitment of census officials.

According to the police, they received information that rowdy youths had stormed the census enumeration camps and attacked the people in training as well as destroy the equipment meant for the training services.

The police therefore decided to dispatch the crowds by firing teargas canisters and involving in a back to back running game.

The youths termed the recruitment process as flawed and foul where the people employed were from a different area.

One of the youth complained that majority of the enumerators were from Eastland rather than Kangemi where the exercise would take place.

“Most of the people given the job do not reside from around here. They were sourced from other regions and given employment while the youths of this region are jobless,” said the youth.

The census training process has been stressful all over the country, with majority of youths sending their grievances to the government based on the state of unemployment.

The complaints were based of the process of recruitment as the officials in charge were involved in corrupt dealings where they took money from people and planted their relatives and friends for those positions.

Ideally, the youths also complained of older people being recruited as staff in the exercise, wanting the jobs to be left entirely for the younger generation.

The area Member of Parliament Tim Wanyonyi pledged his support to the youth by stopping the training until an audit was done. Addressing the dispatched youths he said,

“Training will not continue until the registration of trainees is audited,” said Wanyonyi.

In Homabay County, the same happened and the matter was rushed to court awaiting solution.

The youths in different regions of the country were called in an exercise to submit their names to the chief for the job consideration and as it turns out, 60 percent of those chosen were from different.

Therefore, the progress of the process has been slowed down in many counties due to the same reasons of corruption and foul play such that the certainty of census is questioned.