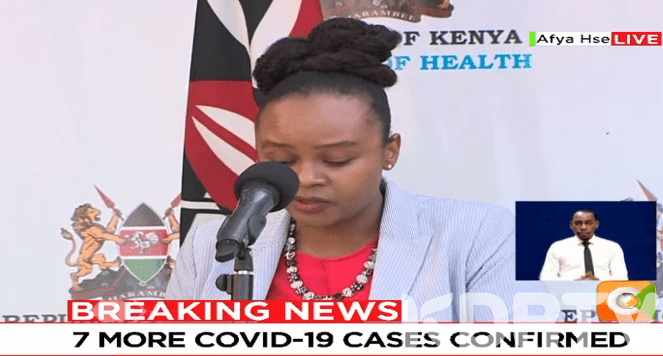 (KDRTV)-The Kenyan Health Ministry has confirmed seven new positive cases of coronavirus, raising the total number of positive cases in the country to 179.

According to Health Chief Administrative Secretary (CAS), Dr. Mercy Mwangangi during a presser, on Wednesday, 7 newly confirmed positive cases of coronavirus are all Kenyans and among them are three males

According to the ministry, of the seven patients, two had traveled from the US, one from Congo and the other from the UK.

Five of the cases were tested and confirmed in Nairobi, one in Mombasa and other in Uasin Gishu

“Two of the cases emanated from our mandatory quarantine facilities while five were picked by our surveillance teams,” said Dr. Mwangangi.

According to the Ministry`s report, one of the critical cases who was a Kenyan had been discharged and relocated to the normal ward after the patient no longer needed a ventilator

Read also: China Wants To Help Africa Fight Coronavirus, But Not Everyone Is Accepting

According to the statistics from the Health Ministry, out of the 179 cases, three of them are aged below 15 years, 49 patients are between 15 to 29 years, while 114 of the victims are aged between 30-59. Thirteen of the patient are aged over 60 years