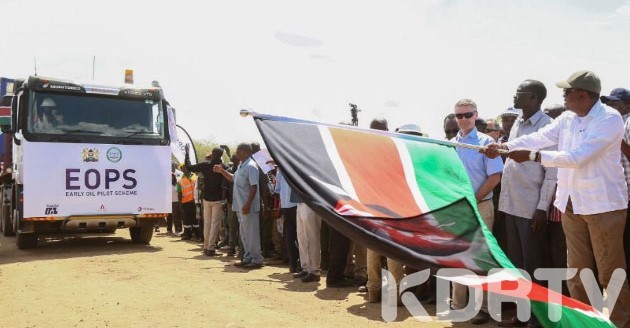 Kenya is expected to net in high profits in billions after the first export of oil consignment with 200,000 barrels. The President flagged off the first tanker which is a Marshall Island registered vessel in a bid to increase development and boost the Nation’s economy while on a visit at the Coast.

“Kenya’s natural resources will be well utilized in a manner to attain and yield maximum dividends. This we will ensure is done effectively without compromising the interests of the future generations,” said President Uhuru.

The consignment then departed the port to the destination of a Chinese buyer engaged in crude oil trading and storage in China.

Oil exportation is expected to align major changes in the industry by growing the economy and creating jobs through employing the youths.

It was first discovered in Turkana years ago, although there lacked enough equipment to extract and refine.

Ideally, the initial oil discovered was not enough since the availability was in small amounts for all the processes, until other mines were discovered and oil extracted.

The oil had been stored at the Kenya petroleum refineries in Changamwe Mombasa, having been transported by road from Turkana.

The oil extraction has been encumbered by different challenges, some facing the residents as well as the mode of transport.

Turkana leaders were dissatisfied by the commencement of the project as it was not aimed at improving the living conditions of the community members.

They then staged a demonstration citing their irreducible minimums that they expected the government to meet and adhere to.

First, they wanted the majority of employed workers to come from the region and the roads constructed to favor them.

At the same time, the residents wanted the government to initiate programs and sponsorship that give back to the community since the oil was in their region.

Although this was settled, there still exists some differences on the same, as some of the grievances were not met.

Yesterday therefore, President Uhuru paid homage to all parties involved in the extraction process all through to the transportation.

He also pledged for equal sharing of resources as the different parties have all played vital roles.

“It is with our understanding that right from Turkana to Mombasa, different people have contributed to ensure we make the first export today. And I ask for equitable sharing of resources according to our laws. We also have to reinvest the proceeds in infrastructure to improve lives of Kenyans,” said the President.

This was in prospect to the Turkana and Mombasa Leaders’ calling on the same with Governor Joho, Lonyangapuo and other related leaders calling for the implementation of the 2016 mining act which accrues that resources acquired from minerals deserve equitable sharing.

According to the Tullow Oil Chief Executive Officer Paul McDade, the company had invested about Ksh. 300 Billion and is planning to make good sales by 2020.

‘We have collaborated with the government as a joint project and aim to yield highly by 2020. We have only drilled 10, 000 square meter of oil out of the 400,000 square meters discovered,” said McDade.

The oil business has put many countries in Africa on the map such as Nigeria and even South Sudan.

With the new discovery and venture, Kenya’s economy is bound to grow and expand, attracting high foreign markets by exporting the oil.

This will not only boost infrastructure but also create employment among the youths through the various stages and processes.