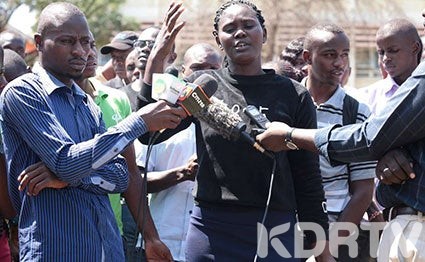 The National Youth Service (NYS) administration is on the spot once again after more than 16,000 youths undertaking different courses and training were barred from attending the classes.

Apparently, the total fee arrears have accumulated to Sh3.3 billion and the students have been prevented from attending the next term sessions.

The Kenya Association of Technical Training Institution (Katti) through there principals made the decision for discontinuation until the fees were cleared.

“It was resolved that the NYS students will not be allowed to report back to their various institutions until all fee arrears are cleared by NYS in the institutions,” read the letter by katti principals.

The NYS has been the center of controversies and fraud in Kenya, with embezzlement of huge amounts of money going on without any arrests being made.

The Auditor general report of 2012 revealed that Sh9 billion had been squandered and embezzled without being accounted for at the institution.

Among the suspects were key government officials including the current Kirinyaga Governor Anne Waiguru who later contested for office despite being in the center of a major scandal.

Waiguru lashed out at Aukot saying he is a beneficiary of the NYS scam and should instead focus on rectifying his defective bill. @Its_Rizack https://t.co/tvPKvPXWsY

Although the suspects were arrested arraigned and probed, they were released on bail and nothing has been heard ever since.

The NYS was created to help in creation of employment to the youth through sponsorship programs that take them to school and train for different causes.

However, this is not the case as the funds set aside for the project have been used to enrich few people and feed their demanding interests.

In regards to the NYS students being barred from attending classes and resuming school, Meru National Polytechnic Student Association Chairman Jackson Kirimi had a lot to say, and linked the poor performance of students to delayed fee payment.

“Last year, many NYS students failed their examinations due to delayed fee payment. The delayed fees prevents them from attending classes which are necessary in exams ranking. Ideally, their upkeep was reduced forcing them to adjust to unfavorable life conditions,” said Kirimi.

The NYS is a balloon on the verge of bursting out and it is only a matter of time before all the evil is unlocked and the project collapsed due to fraud and corruption.

The government should take charge and make the institution accountable for every expenditure through a budget.