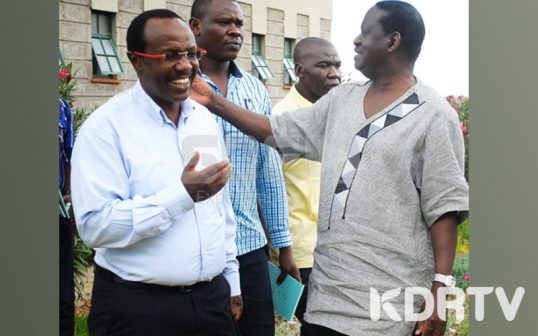 The once glowing affinity and cordial relationship between the former Prime Minister and economist David Ndii seems to have hit rock bottom, and is now in shambles.

Going by the recent tweet, Ndii considers the once bosom friend a letdown and counting it as loss.

The tweet read, “We have completely lost this one, what a loss.”

This comes after the former Prime Minister and NASA  leader posted pictures on his social media handle where he hosted president Uhuru’s sister, Kristina Kenyatta.

Ndii was a renowned National Super Alliance (NASA) strategist who has over the years built a working and brotherly relationship with the former Prime Minister.

He has defended  Raila Odinga in tooth and nail and created a positive momentum through helping campaigns and offering advise.

During the last general elections, he was in full support of Raila Odinga presidency and even affirmed his win to Kenyans.

Ndii has appeared in some of the most heated debates on National Televisions and has been very solid on his support for Raila.

However, things began taking a new twist to the relationship after the famous golden handshake.

This took place mysteriously between Uhuru and Raila as a way of calling a truce and building bridges.

Many people believed that there was a hidden motive behind the handshake and it was to solicit personal gains.

The twitter post by David Ndii is a reflection of the disappointment by his long term friend, who instead of fighting for Kenyans’ rights and being on the opposing side of the government, has joined hands with the looters and is eating  with a bigger spoon.

“Everyone has their own price. The opposition was bought after the golden handshake,” said Kevin.

With all these going on, the only hope for Kenyans is the achievement of the big four agenda and reducing the cost of living that is now chocking their throats.