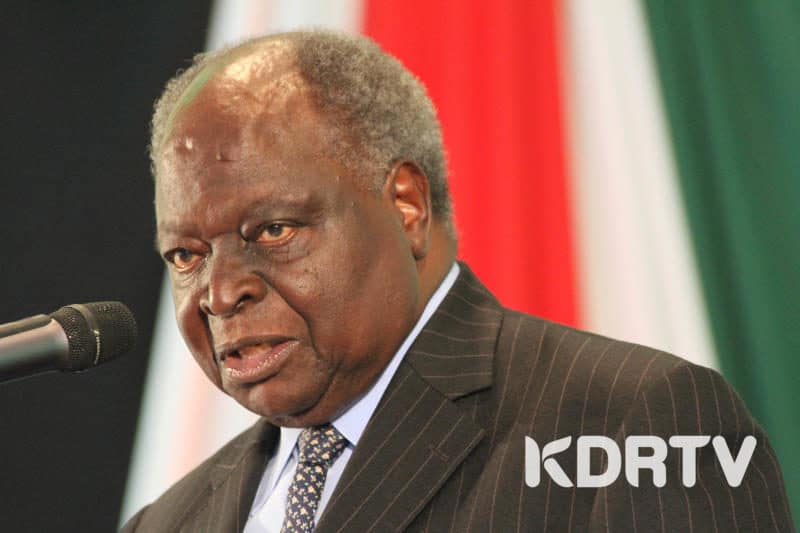 Former President Mwai Kibaki in a past event

(KDRTV) – Former President Mwai Kibaki was on Monday treated at the Nairobi Hospital.

According to sources, Kibaki was at the hospital for routine checks and went back home.

“President Kibaki was at Nairobi Hospital on Monday for a routine check-up and went back to his residence. He goes there for a check-up,” Ngari Kituku, the President’s long-serving spokesperson told a local daily.

News of Kibaki’s treatment comes at a time when two VVIP’s are also at the hospital over different ailments.

Tanzania President John Pombe Magufuli is admitted to the private wing of the hospital, where he is battling COVID-19.

The President, who is said to be on oxygen, has allegedly been booked under a code-name with heavy security.

Next to Magufuli’s room is former Prime Minister Raila Odinga, who is battling an unknown illness. Raila is said to be in high moods and has been asked to take a rest by his doctors. The ODM leader was on an extensive tour of the coast last week. The trip has been blamed as the reason for the fatigue.

Both Raila and Magufuli checked into the hospital on Tuesday afternoon. It is not clear if the two bosom friends are aware of each other’s presence at the hospital.