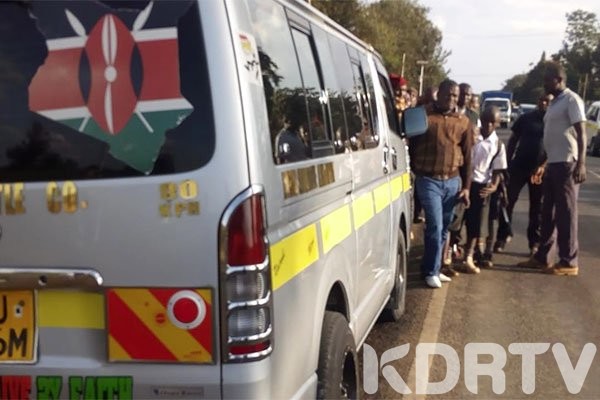 A police officer in Embu County has been accused of shotting and seriously injuring a matatu driver in a roadblock.

Following the incidents, the area residents staged a protest against the officer.

According to reports, the officers were manning a roadblock in Kangaru village when they waved the driver to stop for inspection but he allegedly defied.

It is noted that after the driver defied the order, one of the senior officers opened fire and wounded the driver.

He was then pulled out of the vehicle and rushed to the nearby Embu Referral Hospital for treatment.

At the moment, the passengers screamed in panic.

A witness revealed that the police suspected that the driver was carrying criminals in the matatu and that is why they shot at the vehicle and injured him.

Mary Kageni exclaimed: “The officers wanted to check whether there were criminals among the passengers but the driver failed to stop forcing the law enforcers to act by shooting him.”

However, other residents blocked the roads in protest accusing the police of injuring an innocent driver.

A resident mentioned: “The driver stopped but the police went ahead to shoot him.”

“I’m heading to the scene and I will give a statement after establishing what really transpired,” Mr Rukunga stated.

Subscribe to watch latests videos
In this article:Embu County