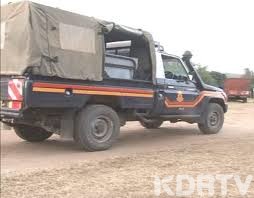 A police officer was on Sunday arrested for defiling a minor in Nyahururu, Nyandarua County.

Mr Fredrick Gitau Mwangi od police number 110957 who is attached to Nyamache Police Station, Kisii County was arrested by his colleagues after the parent of the minor reported the matter.

A police statement seen by KDRTV revealed that the officer was amongst those who are attending a sports practice at Nyahururu Training Camp.

“Please be informed that a police officer attached to Nyamache police station in Kisii County was arrested within Kwa Iria area in Nyandarua County for the offence of defilement,” the police report read in part.

Nyandarua Police boss Gideon Ngumi said that the officer committed the crime and went into hiding but the minor was able to identify him.

“The minor positively identified him but he is yet to be arraigned in court because of the current situation in the country but appropriate action will be taken against him,” a police officer said.

Cases of police officer defiling minors in the country have been on the increase – two months ago a police officer was arrested in Homabay after he was accused of defiling a minor who was under child protection programme at the station.

In January, another minor was manhandled by two police officers who took her to a cave in Mombasa and defiled her repeatedly.

The minor in a statement said that one of the officers was dressed in police uniform while the other one was in plain clothes.