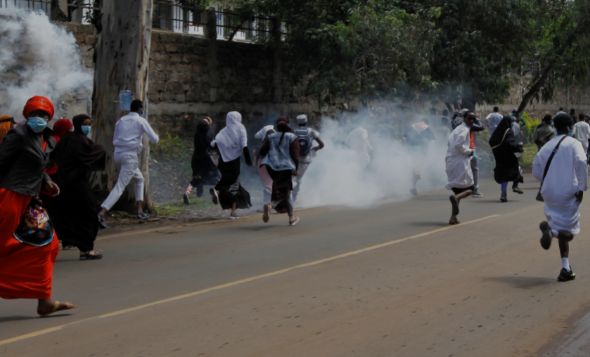 A police officer shot and killed six people before committing suicide in Nairobi’s Kabete area in a bizarre incident after having an argument with his wife.

The deceased included his wife, neighbours and bodaboda riders who had rushed to his house to check what had happened when they heard gunshots on Tuesday morning.

Police Constable Benson Imbasi, who later committed suicide by turning the gun on himself, had first killed his wife by shooting her on her neck, before he walked out of his house and started shooting at innocent members of the public.

In the sad incident that occurred today at 3am, the cop, who was wielding an AK-47 assault riffle, also killed three young men and a boda boda rider at N market within Kabete.

A police officer in Kabete has killed his wife and 5 other people before turning the gun on himself.@FredMatiangi please introduce mandatory counselling to all men in uniform pic.twitter.com/THngjE1rQI

The three men whose identities are yet to be established were mourners who had just attended a funeral preparations meeting for one of their beloved at mountain view.

After killing the three, the cop then turned his riffle at two boda boda riders, one of whom lost his life while undergoing treatment at the Kenyatta national hospital.

The boda boda rider had woken up early to first deliver loaves of bread at different shops which was his side hustle, before embarking on his daily routine of ferrying passengers.

READ ALSO: Panic In Kisii As Unknown People Exhume Body Of Child At Night Chop Body Parts And Left Head In Coffin Then Dumped It Next To River(Photos)

Recounting the scary ordeal, the security manager of Makini Security Services, Purity Cheruiyot said that she was called by one security guard who informed her of the incident.

“I was called by one of my juniors deployed at the apartments, who told me that there was a loud bang coming from one of the houses followed by a huge fire,” said Purity.

She rushed the injured bodaboda men to Eagle hospital in Kangemi, where they received first aid before they were later transferred to Kenyatta national hospital for specialized treatment.

The shooting has caused outrage in the area leading to protest that has seen roads closed and property destroyed.

The locals lit bonfires at the scene where some of the victims died asking to be told how it happened.

“We have been told the officer had mental issues. Why was he at work?” asked one local.

09:21 Current situation at Mountain View following killing of 6 by police officer in Kabete pic.twitter.com/SOpJtQWsjL via @teddyeugene

“We do not know the motive of the incident but we have lost seven people including the officer who died by suicide,” said Wahome.

The shooting comes at a time when police force is struggling with mental health and has been doing everything to help officers improve their mental health.

Inspector General of police Hilary Mutyambai had in 2019 launched a new programme Muamko Mpya-Healing the Uniform Initiative to give psychological support to officers.

“The ultimate goal of the initiative is to provide officers with knowledge, tools and a framework to assist them to support each other while handling traumatic situations,” Mutyambai said.

“They encounter most of these situations on personal and professional levels.”