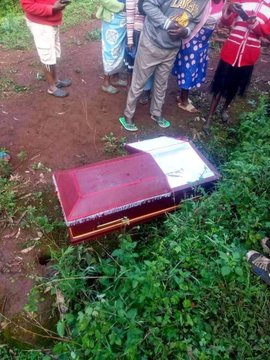 There was panic in Gionseri, Bobasi, Kisii County after residents woke up to a bizarre incident of an exhumed coffin with the body missing.

According to reports, the body of a kid is believed to have been exhumed by unknown people at night in the area.

The news was first reported by journalist Abuga Makori who revealed that police believe witches might have exhumed the body then allegedly feasted on the human flesh.

BREAKING: Coffin purportedly used to bury a kid at Gionseri, Bobasi in Kisii found near a river bank. However, the said body could not be traced. It's believed that the body was exhumed by witches. Matters witchcraft are rampant in Gusii. It's believed witches eat corpses. pic.twitter.com/BI8tWyo9rl

“Coffin purportedly used to bury a kid at Gionseri, Bobasi in Kisii found near a riverbank. However, the said body could not be traced. It’s believed that the body was exhumed by witches. Matters of witchcraft are rampant in Gusii. It’s alleged that witches eat corpses,” said Makori.

Police were called and carried the coffin back to the station but like many others, didn’t have enough answers to what might have transpired.

Those who come from Kisii and and Nyamira, have heard about Ogotarigwa. Who picks people from the house and makes them dumb? It's high time we accept that these people exist in our society. Admission doesn't kill anyone. They are an Embarrassment to us.

Witchcraft cases have been rampant in Kisii leaving many in fear.

Currently, police in the county are seeking  17 more suspects in connection with the lynching of four ‘witches’ that happened almost three months ago.

The four were lynched on October 17 by a mob in Nyagonyi. They alleged the four women had bewitched and abducted a secondary school boy found lying on the ground.

Journalist Makori said that people shouldn’t claim that there’s not witchcraft while he has seen it with his own eyes.

According to the seasoned journalist, his dad was bewitched, something that led to his death.

“In March 2021, My father passed on. At the hospital, no disease was detected. He complained of something moving within this stomach. All examinations didn’t reveal anything. He puked a snake. So, you want me to believe this was normal? Never,” he said.