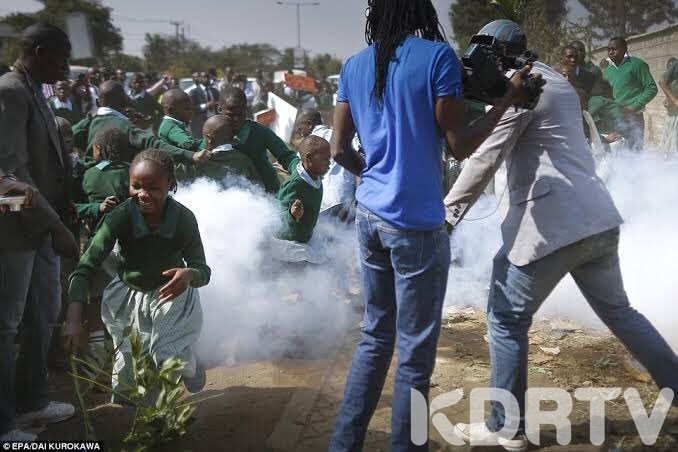 (KDRTV)  – At least one person has died from the ongoing demonstrations in Kasarani.

Kasarani residents have been demonstrating for four straight days over the poor roads in the area. Transport has been paralysed in the area, with residents barricading the main Mwiki-Kasarani road with burning tyres.

However, police descended on the demonstrators with teargas and live bullets on Wednesday. Reports on social media claimed that at least four people were killed in the chaos.

Wanna hear a joke ?
My country ! 😡
Imagine Yesterday 4 innocent Kenyans Protesting for good roads in Kasarani were killed , Children and Residents were tear gassed and this morning News outlets are full of politics as if we are voting tomorrow 🤡#Kasarani pic.twitter.com/AKTtkWTW7Y

Pictures showing a dead man who had been allegedly shot by police have gone viral on social media.

#Kasarani How do you kill youth who are unarmed. We've been doing just fine since the demo started until the police decided to make themselves famous. We've been walking and govt doesn't give a damn. We shall not forget. #wajingasisi

Interestingly, the mainstream media has not reported on the violence meted out on demonstrators.

#Kasarani should have been the headline in every news broadcast yesterday, but noooo! Citizen just mentioned it as though lives were not lost, at the 31st minute… yes I checked!
A revolution must happen! We cant trust anyone but our pain, blood sweat and tears. #DespotsMustFall

“This young boy from Mwingi was murdered by Despot Uhuru Kenyatta for being unemployed and poor. He is among the 4 innocent civilians who were gunned down by the despotic police while protesting PEACEFULLY. They wanted a road they had paid for,” Miguna said on Twitter.

This young boy from Mwingi was murdered by Despot Uhuru Kenyatta for being unemployed and poor. He is among the 4 innocent civilians who were gunned down by the despotic @PoliceKE while protesting PEACEFULLY. They wanted a road they had paid for. #DespotsMustFall pic.twitter.com/wLOkURo2ds

“Painful to see the pictures of bullet-ridden bodies of young people, whose only sin is to peacefully protest against bad roads. You cannot talk of building bridges when you murder the youth and you extinguish their future,” Akombe said.