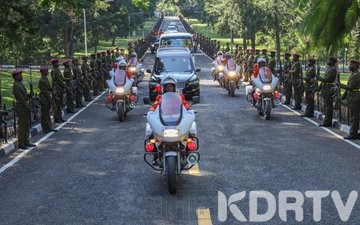 The cortege left the Lee funeral home to Statehouse at exactly 8:00 AM. Visiting heads of states were allowed to pay their last respects to the man who ruled Kenya for 24 years. Visiting statehouse was also a simple of respect for the entire period he stayed there.

Soldiers lined up man to man at Statehouse to honour the retired President.

It is at the house on the hill, that the celebrations started. The Kenya Defence Forces played all the three stanzas of the national assembly before the casket was put on the gun carriage. The journey to the Nyao Stadium started at around 8:40.

In a show of might, the soldiers escorted their former Commander in chief from Statehouse all the way to Nyayo, a journey of about 5Km. The procession took Statehouse road, Kenyatta Avenue, Uhuru Highway and Aerodrom Road.

Nobody expected that the soldiers would walk for such a distance. In fact, this has never happened in the history of the country before.

And in a show of respect for his political mentor, President Uhuru Kenyatta’s motorcade slowly followed the procession which took more than an hour.

More than 30,000 Kenyans had filled up the Nyayo Stadium before 8;50 AM. The stadium was closed around this time locking out thousands who had turned up to for the state memorial services.

More than 10 heads of states and other dignitaries have turned up at the stadium.