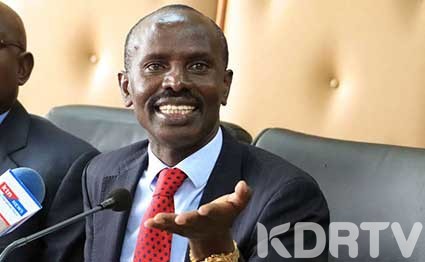 The leadership wrangles in the Kenya National Union of Teachers (KNUT) has intensified as Secretary General sought to have security to access the union offices.

On Friday, Justice Maureen Onyango ordered that police officers in form of security should be accorded to the SG as a matter of urgency.

This comes after Sossion requested the Employment and Labor Court to intervene in the matter due to threats he had allegedly received.

“This matter is certified as urgent and therefore I order that the Secretary General is given the security he needs to access the office at Mfangano Street,” read Justice Onyango’s order.

READ ALSO: You Have Until Monday To Surrender KNUT Property Or Risk Getting Arrested, Sossion Warned.

Early this month, the ODM nominated MP was purposedly dethroned his Secretary General’s title in a night process replacing him with his deputy Hesbon Otieno.

He however challenged the matter and was later reinstated although the wrangles grew worse, with other officials aiming for his blood.

Sossion woos started after he joined politics and was nominated by ODM as a member of parliament.

Other executives and officials accused him of ignoring their agendas and grievances and only making decisions that were in his favor.

His scandalous dethroning was planned without his knowledge and executed to perfection, and indication that he had fallen out with majority of the other KNUT officials.

Well, ideally an ultimatum had been issued to have him surrender all union property under his care including the official car, failure of which he was threatened by a legal action.

Things are not going well for the vocal unionist and the only way he would survive is under tight security, since other officials are aiming for his blood.

In March this year, Sossion filed a complaint that goons had been hired to lock him out of his office and added that his life was at stake.

“These are goons that have been hired by my colleagues with strict instructions to block me from accessing my office. I want to tell them that they have failed and my position still stands,” said Sossion.

The aim of these threats are to make him back down and step out of office,  since he has hardheadedly refused to willingly step down.

The security urgency is thus aimed to prevent the colleagues and other union members from intimidating him and attacking him, although the certainty of its success is not valid.