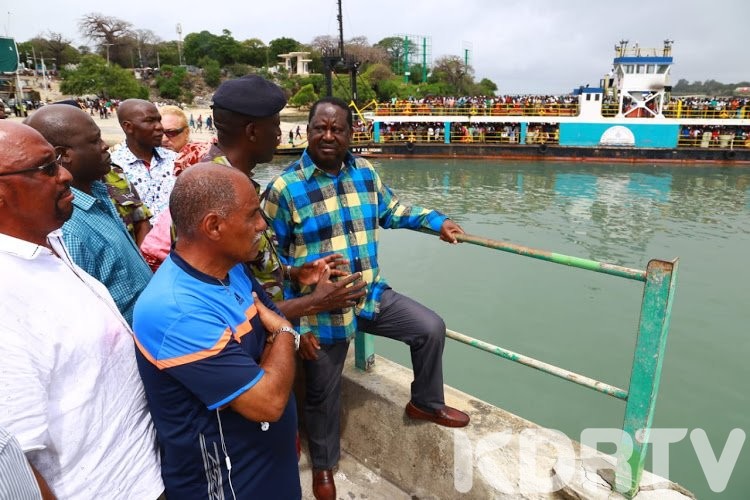 Orange Democratic Leader and AU High representative on Infrastructure Raila Odinga has ordered halting of the dredging exercise at Likoni.

Odinga has said that in order  to succeed in the recovery efforts of getting the bodies of 35 year old Miriam and her daughter Amanda, dredging had to be stopped till complete.

Dredging is an exercise done to deepen the channel to allow for bigger ship to dock at the Mombasa port.

He made the remarks after visiting the scene of the tragedy and supervising the ongoing operations to help recover the bodies of the mother and her daughter who plunged into the Indian ocean, acting as the AU representative for infrastructure.

“I want to give an order here that the dredging works stop immediately so that those who are working here can work without interference,” Raila said.

"I want to give an order here that the dredging works stop immediately so that those who are working here can work without interference." https://t.co/1xXWxZexa0

According to Raila, the accident was a confirmation that Kenya and Africa as a whole suffer from infrastructural problems, adding that much more need to be done to ensure the safety of people on roads, water and air.

He also asked the teams that were deployed at the base to put all available effort to retrieve the bodies while condoling with the deceased families.

He applauded the Navy for their efforts adding that he was satisfied so far, urging them to continue and not halt the recovery operation.

“The team is capable of doing the necessary retrieval. We say pole to the family as the entire Kenyan nation is in mourning,” he said.

35 year old Mirriam and her 4 year old Amanda had plunged into the ocean when the vehicle reversed, and it has been seven days since the incident with operations to recover the bodies deemed futile.

The family is yet to come to terms with the failed rescue mission with the government promising to do everything possible to give them the closure needed.