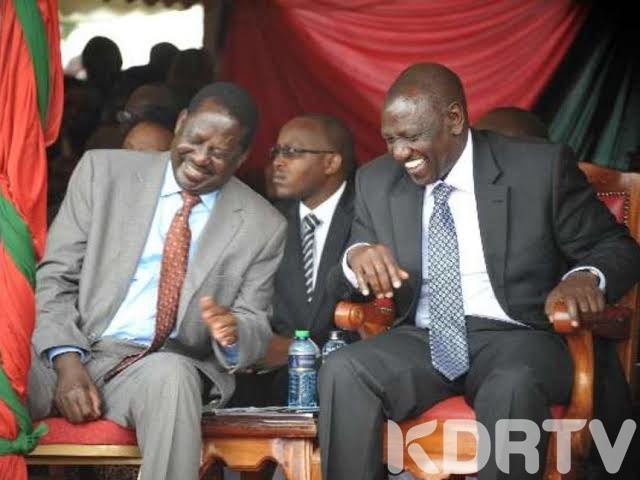 (KDRTV) – ODM leader Raila Odinga has said that he will have no issue with a William Ruto Presidency if the Deputy President is elected by Kenyans.

In an interview on NTV, the former Prime Minister suggested that has a chance of becoming Kenya’s President in future.

“If the people of Kenya elect him as president, who I’m I to say No.” Raila replied to a question in which he had been asked if he sees Ruto being President one day.

The African Union envoy further said that he has nothing personal against the DP, only that they differ in ideologies.

“I don’t hate him as a person. There are certain things he does or has done that are basically contrary to what I would think is the correct way of doing things.” he said.

Raila accused the DP of corrupting the political system with his humongous church harambees. He said Ruto’s donations do not match hi salary.

“What kind of business does William Ruto own that makes those millions he produces every week. 52 weeks in a year, he contributes not less than Ksh.5 million every weekend. If you do a lifestyle audit of Mr William Ruto, you will find that the source of that money is questionable. And that is the issue I have with him. Otherwise, I have no serious personal issues with him,” he said.

The two political heavyweights were in the same camp in the 2007 elections. Ruto massively campaigned for Raila in the vast Rift Valley voting bloc and paid the ultimate price for it as he was sent to ICC over the violence that erupted after the elections. Raila became Prime Minister in the Coalition Government.

However, Raila says Ruto will have to open up about his source of wealth if they are to work together again in future.

“My values are very clear so before I get into any kind of relationship I will have to question,” Raila said when asked if he could work with the DP again.