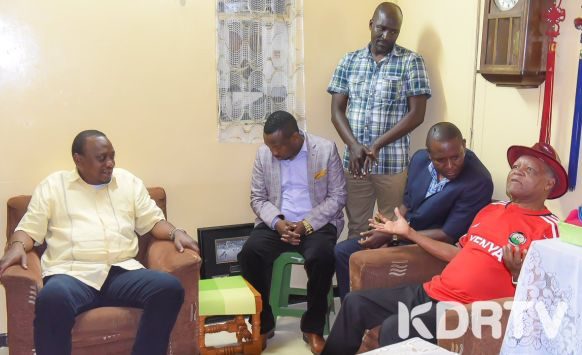 President Uhuru Kenyatta and ODM leader have both contributed 1M shillings to go towards the funeral expenses as well as hospital bill for the departed football legend Joe Kadenge. Raila led the fundraiser on Tuesday evening at Charter Hall in Nairobi. Among attendees were various leaders, MPs and friends of the former Harambee Stars skipper.

The family had appealed to the public to help them offset medical bills as well as cater for the funeral expenses of Kadenge, which amounted to 5M shillings.It is out of this need that the  family  organised for a fundraiser today, July 16, geared towards raising funds for the funeral.

“The family invites everyone willing to join them including all sorts of sporting federations such as football, rugby, athletics, and volleyball among others to join them in fundraising,” the family spokesman Chris Mmbwanga said a week ago.

Kadenge, who was 84 years old at the time of his death, has been unwell for a while now.

President Uhuru Kenyatta, opposition leaders Raila Odinga and Musalia Mudavadi were among those who consistently visited Mzee Kadenge when he was unwell.

Two years ago, President Kenyatta gave Kadenge Sh2 million and also directed the football legend be offered a National Hospital Insurance Fund cover. After that kind gesture, Kadenge thanked the Head of State and also challenged the government to invest in the sports industry and take care of its heroe

Kadenge started his football career in 1958 as an attacking midfielder and second striker for the defunct Maragoli United, before crossing over to Abaluhya United (now referred to as AFC Leopards) in 1996.

He is remembered for his silky skills, deft touches and mazy runs at the center of the pitch and would soon be associated by the popular phrase ‘Kadenge na Mpira’ courtesy of renown broadcaster Leonard Mambo Mbotela.

Kadenge also turned out for and coached the national football team, Harambee Stars, with prominence and success.