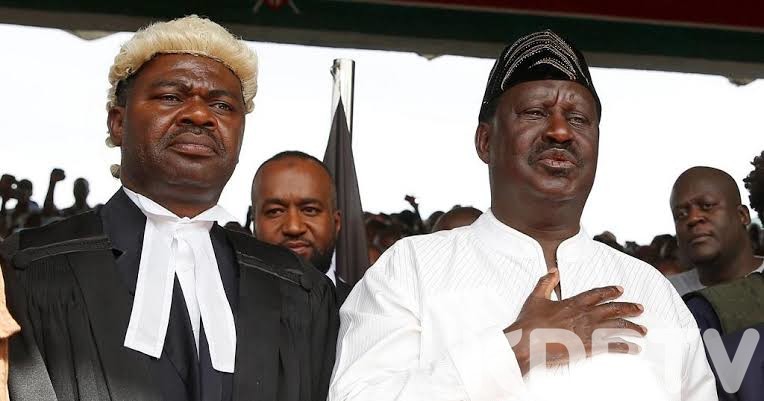 Kajwang was in February 2018 charged at the Ngong Law Courts with sanctioning the administration of oath on the National Super Alliance (NASA) captain Raila Odinga. Government authorities declared that the NASA leader had perpetrated a capital offense of treason.

Read also: My stepmother took everything my father left and wanted to kick us out of our home

In a judgment made on Wednesday, Chief Magistrate Stephen Mbugi pronounced that the oath of the “People`s President” that Raila was involved in was not unlawful since he did not use it commit a crime.

“From the content of the oath, Hon Raila Odinga swore himself to the office of the people’s president which does not amount to any crime. He would have only breached the law if he swore himself as the president of the Republic of Kenya,” ruled Mbungi.

The judge further affirmed that the prosecution side did not present sufficient evidence that Kajwang permitted to swear in Raila and that it was illegal to think that the lawyer appropriated the position of the chief justice during the ceremony by the way he dressed during the event.

Read also: Painful lesson after having an affair with a woman next door

“The attire he wore that day is the normal one worn by advocates of the High Court and to me there is no law or rule which restricts when and where it can be worn,” said Mbungi.

Again, Kajwang was indicted for the second count of engaging in illegal assembly without notifying the OCPD in Nairobi. However, the judge stated that the prosecution did not avail enough evidence that the lawyer planned the event.

“The fact that the accused is a known member of NASA cannot make the court to assume that he was concerned with organising the event since it is possible the meeting was organized by other people and he was only one of the invited guests,” ruled the magistrate.

Finally, the judge ruled that TJ Kajwang has no case to answer at all.

On the contrary, Canadian-based Kenyan lawyer Miguna Miguna is in exile after being accused by the government to he presided over the illegal swearing-in of Raila Odinga.

Miguna Miguna and Raila Odinga had involved in an ugly confrontation after Miguna Miguna complained that he sacrificed his life to swear in Raila, who later went and betrayed his followers according to Miguna Miguna.

It is not clear whether Miguna Miguna will be back in Kenya any soon and whether he still has a case to answer concerning the swearing-in of Raila Odinga after the 2017 general election.