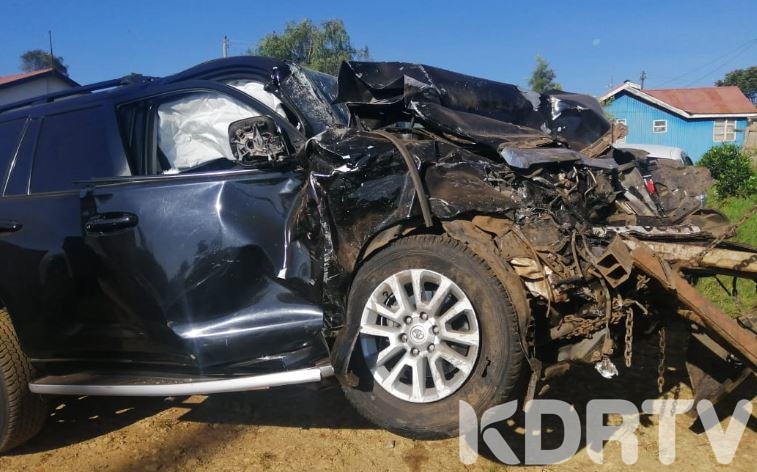 Tuju’s vehicle rammed into a matatu at. He was on his way to Kabarak for the funeral of former President Daniel Arap Moi.

The CS is believed to have been over speeding in an attempt to get to Kabarak on time.

He is currently admitted at the Kijabe mission hospital. Despite earlier reports that he had been airlifted to Nairobi, the latest news says that he is not in a condition to travel.

This is the main reason why his family was taken to Kijabe.

Jubilee SG Raphael Tuju’s family airlifted to Kijabe
Raphael Tuju is stable but not okay to be transferred pic.twitter.com/vIr03jyc5Y

His driver, who sustained a fractured hand is also in a stable condition.

Very little has been said about the passengers who were in the Nucleur Matatu which was on its way to Nairobi.

Police said the driver of the vehicle tried to avoid hitting another vehicle before ramming into to Tuju’s car.

“The driver said he was avoiding to hit another car when he collided with the other car carrying the CS,”  Central Police Commander Patrick Lumumba told journalists.

Sports CS Amina Mohammed, who was also on her way to Kabarak, visited the scene of the accident.

Kwani Kenyan Media think that Raphael Tuju ndio the only important person in that accident worth mentioning?
What about Tuju's driver and occupants in his vehicle and the 14 people in the Matatu?
Who's going to say something about them? Nonsense pic.twitter.com/Vvdol8WhIX

Transport has been disrupted on the busy highway, as police banned heavy commercial vehicles from using the road.

This is to allow mourners to attend Moi’s funeral service.