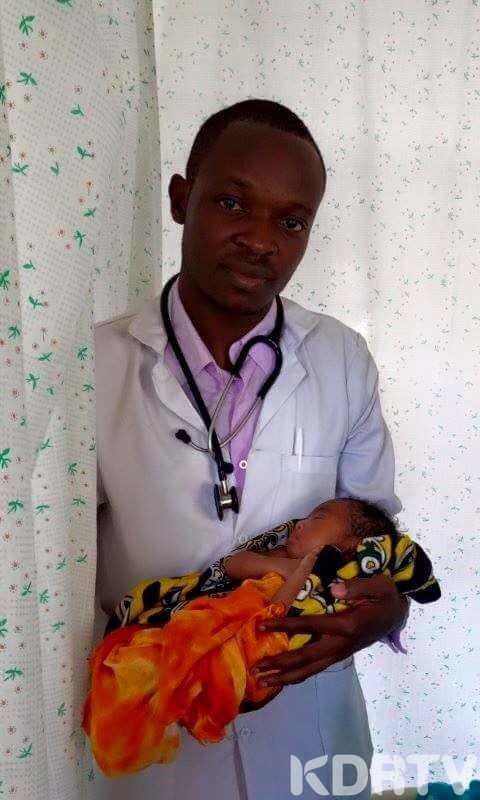 Busia Governor Sospeter Ojamoong has celebrated a doctor who donated his blood to save the life of an expectant mother and her unborn baby as a Shujaa.

In 2017, Dr Habil Wesonga started treating a woman who suffered from Eclampsia. The unnamed woman also happened to be pregnant.

Trouble started when the time came for the woman to deliver her bundle of joy. She needed an emergency blood transfusion since she was anaemic.

Dr Wesonga decided to donate his own blood despite it not being part of his job description. He later scrubbed in for her CS.

A picture of the doctor holding the cute baby, who was named Habil Wesonga, immediately went viral on social media.

Governor Ojamong revealed that Dr Wesonga is actually based in Busia County and asked Kenyans to celebrate him on Mashujaa Day.

“Dr.Wesonga’s kindness saved two lives,& the mother couldn’t hesitate to name her newborn after him. Let’s celebrate this Shujaa,” reads part of a Tweet on Ojamoong’s Handle.

Meet Busia-based Dr.Habil Wesonga who donated his blood for an expectant anaemic mother.
He then proceeded to scrub in for the Ceaserian delivery.
Dr.Wesonga's kindness saved two lives,& the mother couldn't hesitate naming her newborn after him.
Let's celebrate this Shujaa. pic.twitter.com/SEihMKBzng

Several Kenyans who commented on the tweet celebrated the hero doctor.

May the Good God who called him to the medical profession continue blessing him abundantly.

Does Wesonga deserve a Head of State Commendation? (HSC) Yes, we think he is better than Githeriman and the Itumbis of this world who have previously received the award.

This is the staff for HSC

But a section of Busia residents asked the governor to explain what he has done in his county especially on matters health.

How about you bwana governor? You are repeatedly raping and plundering the county . Take lessons from this young man.and steer the county to prosperity. You can still redeem your image