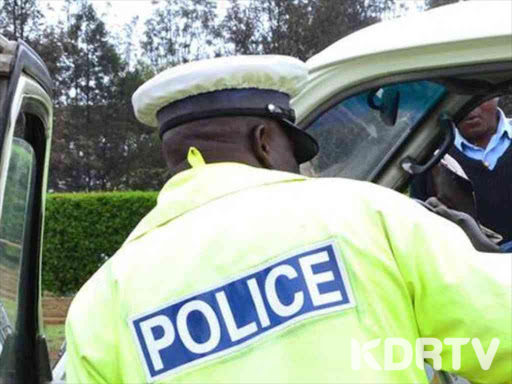 A video has surfaced online portraying a fracas between a motorist who is believed to be an Uber driver and a traffic cop.

In the video, it is not clear what exactly ensued before the confrontation but the traffic cop is seen inside the vehicle with the motorist on the driver’s side.

They are both struggling to hold each other, while the vehicle is parked on the side of the road.

The struggle goes on for a few minutes before the cop is thrown out by the driver, although still hanging on.

Thereafter onlookers are seen in the video coming for the cops rescue and trying to evict the driver from his seat with no success.

They are overpowered and the driver takes off in speed while the police is still hanging on.

The traffic cop has alleged that he was attacked after confronting the driver for bending traffic rules, adding that the motorist had fled off with his traffic cap.

Social media uses have had mixed reactions to the video, some praising the motorist for being stern and refusing to engage in corruption while others rebuked him.

However, there are questions that raise alarm such as “why the cop was inside the motorist’s car”.

This has been an issue in the recent past, and the law states that the vehicle is private property such that a police officer is not allowed to force his way inside.

Rather, he is supposed to request for one’s documents, and in case of a problem, request the driver out of the vehicle.

although there has been no official statement from the police sector, the war between traffic cops and motorists is one that has not started recently.

The wars take turns, putting one party on the wrong while the other on the right and vice versa.

However, such stunts can lead to loss of lives and proper measures should be taken to deal with it.