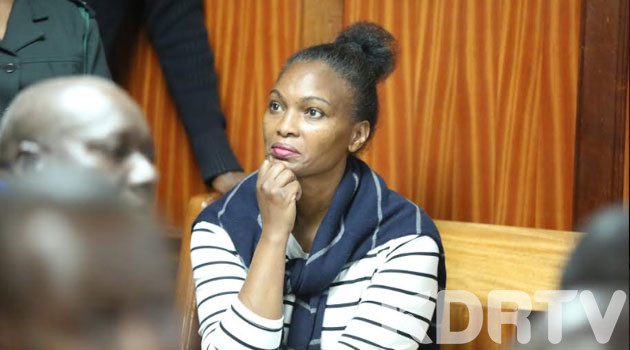 (KDRTV) – Sarah Wairimu, the main suspect in the murder of Dutch business tycoon Tob Cohen, allegedly conspired with a top judge to cover up the case, new revelations have emerged.

According to a local daily, Sarah allegedly sought the help of the Court of Appeal Judge Sankale ole Kantai to help her write a police statement in the Cohen Murder case.

Sankale was arrested on Friday morning on accusations that he helped Sarah craft police reports and also gave her advise.

Daily Nation had reported that the judge paid for Sarah’s air ticket to Kisumu last year where they met at  Kisumu Aqua Pool Bar where he was attending a seminar.

The newspaper claimed that it accessed text messages between Sarah and the Judge and the two referred to each other as ‘my love’.

“Good morning. Driver left five minutes ago. He is coming for you,” the judge wrote.

“OK love,” she replied as quoted by the Nation.

The lovebirds spend two days at the hotel before Sarah flew back to Nairobi to record a police statement.

Sarah is accused of sending copies of the police report to Ole Kantai for him to edit.

“This is what the police have recorded, peruse, add/remove what is necessary and return…” reads one of her texts.

Cohen’s mutilated body was found in a septic tank in his compound in September last year. He had been reported missing three weeks earlier.

Sarah has been charged as the main suspect in the macabre murder. Though she is out on bail, the prosecution may seek her arrest after the new evidence.