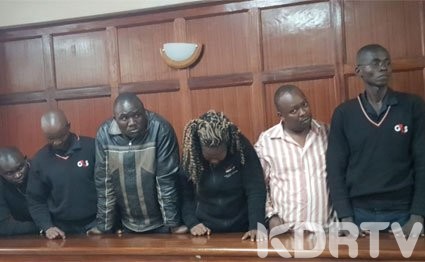 The guards were treated as suspects in the case involving the loss of huge sums of money, with a lots of fingers pointing at them and labeling the heist and inside job.

According to the information given out to the media, the six guards were the ones in charge of transporting to Standard Chartered Automated Teller Machines in Nairobi West before the heist was staged.

“The six suspects will be held for one more week to allow the police conclude their investigations. During this period you will have to stay in custody as you might interfere with evidences for this case,” ruled Chief Magistrate Martha Mutuku.

The magistrate however did not cast a spell condemning the suspects as guilty, she said that although they might be victims of circumstances, it was in the best interest of the defense and prosecution that they are detained to pave way for clear and conclusive investigations.

The Sh. 72 Million heist hit the country at the most unfortunate time where the CBK had introduced a new currency and issued a deadline for the old notes to be exchanged.

Six G4S guards who lost Sh72m to gangsters detained: Police had asked the court to detain the suspects for ten days. https://t.co/S0divPnQZK

The robbery ignited a lot of different reactions from social media users each taking different stands.

Majority however, concluded that the robbery was an inside job, well executed and put to test.

“There is no way the guards would be escorted with robbers who were masquerading as police officers. You can identify a police officer and differentiate between one and a robber,” said one Twitter user.

This is not the first time huge amounts of cash are lost in the hands of bank or financial institution workers.

The sad part is that none of the initial cases have had suspects brought to book and charged.

Last year, one of the biggest robbery plot hit the Kenya Commercial Bank (KCB) in Thika with suspects drilling a hole through to the bank and getting away with Sh. 52 Million.

Although they were since arrested, nothing much was heard about the case apart from part of the money that was recovered.

This has now become a worrying trend in Commercial Banks sector an indication that the banks are no longer safe for finances.

The case will be heard after one week, with the police in search for any information and leakages that might lead to the arrest of the perpetrators involved in the robbery.