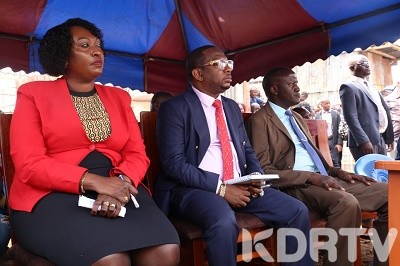 In a letter written to Nairobi County Assembly Speaker Beatrice Elachi, Sonko asked the assembly to approve her nomination to ensure the government remains operational following his incarceration.

Until her nomination, the little known woman served as the Chief Officer in the Department of Disaster Management and coordination in Nairobi County.

Very little is known about Mrs Mwenda apart from the fact that she lost her husband through an accident near Athi River January 2019.

Governor Mike Sonko is among the people who mourned Mr Phillip Njiru.

According to documents from the Nairobi County Assembly Archives, Ms Mwenda holds a Bachelor’s Degree in Criminology from the Dedan Kimathi University.

Before joining the public service, Ann worked as a Security Supervisor in charge of Quality Control and Training at the Kenya Airports Authority.

In 2018, Sonko controversially, attempted to appoint exiled lawyer Miguna Miguna as his Deputy. He hadn’t even consulted the controversial politician.

City lawyer and politician Caren Nyamu is among the many people who have been linked with the Deputy Governor’s position.

Sonko has operated without a deputy since the resignation of Polycarp Igathe in February 2018. Igathe cited failure to earn his boss’s trust as the reason for his resignation.

The governor is currently barred from office after being charged with more than 18 counts of corruption and misuse of office charges.

It is not clear how DPP Noordin Haji will interpret Sonko’s decision to appoint a Deputy. Is it a violation of his bond terms?