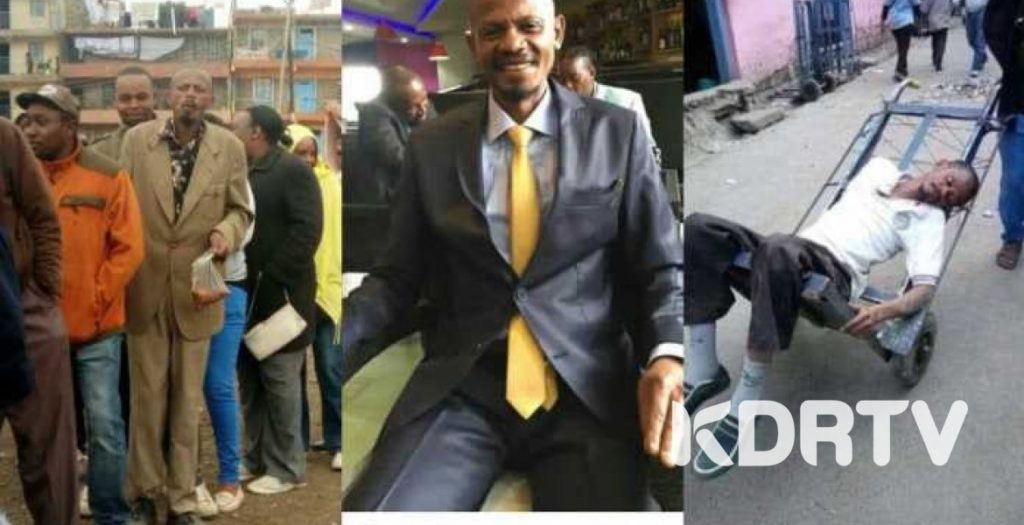 Martin Kamotho made a frenzy buzz on social media during the August 2017 general elections when he was pictured queuing to vote early in the morning with a clear polythene bad carrying ‘githeri’.

He thus acquired the title ‘githeri man’ due to the publicity hence trending trhough memes and jokes.

This happened at a very troubling time as Kenyans were going through a very rough election and devastating news were all that flaunted the media houses.

READ ALSO: Horrific Tragedy as a Kenyan Man Visiting US drowns and dies in Maryland

The plight of the githeri man was hence a relief from the bad news and happenings that were all over due to elections.

The ‘Githeri Man’ then acquired full publicity with interviews in media stations and sponsorships from different organizations where he was cleaned and transformed.

He was then invited for the President’s inauguration ceremony. During the Jamhuri day celebrations in December 12, 2017 Kenyans were again thrown into utter shock when they realized that the ‘githeri man’ appeared on the list of people to be awarded the state honors.

This award is basically awarded to individuals who have been impressive in different dealings and earned it over a period of one year.

The confusion arose as the githeri man had nothing to show he earned it since there were more deserving people including athletes who had made Kenya proud and matched the criteria for the award.

This week, a picture surfaced of the githeri man drunk to unconsciousness being transported in a cart.

The picture stirred lots of questions on the importance of the state commendation honors and dubbed it dubious as instead of doing positive development he was found on the wrong side encumbered with drunkenness acts.

The commendation ideally was controversial as it detailed names of people who were linked to controversies and drama.

Details then emerged that Kamotho, alias the ‘Githeri Man’ was a chronic alcoholic who was in and out of rehab.

Subscribe to watch latests videos
In this article:Githeri man