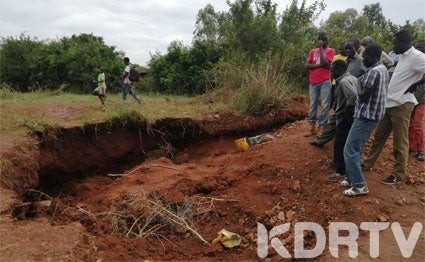 Three gold miners have been confirmed dead in Nango, Bondo, Siaya County after a heavy downpour that caved in the mine.

The three according to Bondo Sub-County Police Commander Antony Wafula included a university student and two others who had completed high school.

“The mine collapsed  due to heavy down pour and trapped three students. Their bodies have however been retrieved and taken to the sub-county mortuary,” said Wafula.

He added that serious investigations regarding safety measures in the mine had been commenced and the mine will be kept closed until the measures were implemented.

“Mines in the area will be closed until all the safety measures are adhered to,” he said.

The Police commander also added that the residents were defiant of government directives which had earlier ordered all mining activities to be stopped in Nango until safety measures were upheld.

He linked the incident to negligence and ignorance of obeying government directives aimed to ensure their safety.

Cases  of mines collapsing have been in the rise recently especially Siaya region, with miners eager to make quick money at the expense of their safety and lives.

Residents were urged to keep of risky mines and ensure the safety regulations measures were upheld before embarking on the activity.