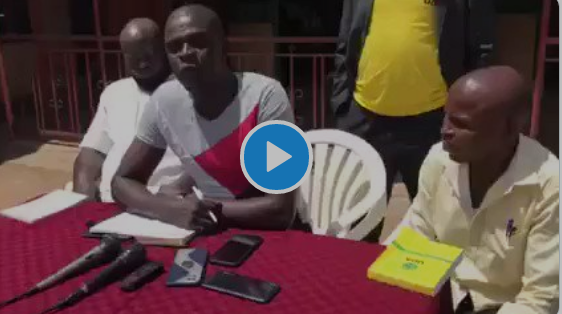 A presser from United Democratic Alliance(UDA) youths in Kakagema on October 29 ended prematurely after a man slapped the speaker.

Immediately after mentioning Khalwale’s name, the man intervenes and slaps the speaker on the back demanding him to cut the meeting and stop speaking about the former senator.

The youth leaders accused Khalwale of patronizing and using them for political mileage.

“The fact that we are speaking, we do not want what we call political chieftaincy or patronage. We don’t want to be patronised here in Kakamega,” said the speaker before being cut short.

In a press conference on October 28, youths and women led by Isukha East MCA Farouk Machanje asked Khalwale to release the Ksh 1 million donated by Ruto.

Weeh After Boni Khalwale was accused of chewing the youths 1 million shillings from his Sugoi master DP Ruto ,a certain youth tried to raise that issue , But Khalwale had his bull Fed with bhang standby and the slap tells it all 😂😂 #NewsGang pic.twitter.com/ftJDbWlhrC

They also asked the DP to stop donating money through the former senator because he pockets it instead of giving respected parties.

“I’m here as the MCA of Isukha East, and we want Khalwale to come out and account for the Sh1 million donated by RUto to help the women and youth,” Machanje said.

Mchanje, who also accused Khalwale of being a political broker, asked UDA to give the party ticket for Kakamega Governorship to another aspirant instead of Khalwale.

“I am asking my friend DP, kindly look for someone else and work with him for the Kakamega county gubernatorial race. Khalwale is a no. He is a political broker,” the MCA added.

The DP has been on the spot over his erratic donation during his campaign.

According to the small-scale traders, the money was given to con men masquerading as traders instead of them.

“The Sh2 million donated by the DP help small scale businesses landed in the wrong hands,” said the traders who were led by Richard Nyangoto.

According to Nyangoto, only Ksh 700,000 donated reached the traders and can’t trace the rest.

“The purported officials had sidelined the bonafide market officials intending to embezzle the money and we, therefore, want the balance recovered,” he said.

Ruto has donated close to Ksh 20 million in just two months while traversing different counties to push his bottom-up agenda.

ODM leader Raila Odinga has attacked DP’s donations accusing him of stealing public funds and donating them as handouts.

“Every month he’s giving handouts of Sh100million. Yet we know that his earnings are about Sh3million. Where is he’s getting the money?… loopholes are sealed,” he said.

“The biggest problem affecting Kenya is corruption. People have embezzled public funds. When they got to the government they were thinner, but now they are fat like a tick.”