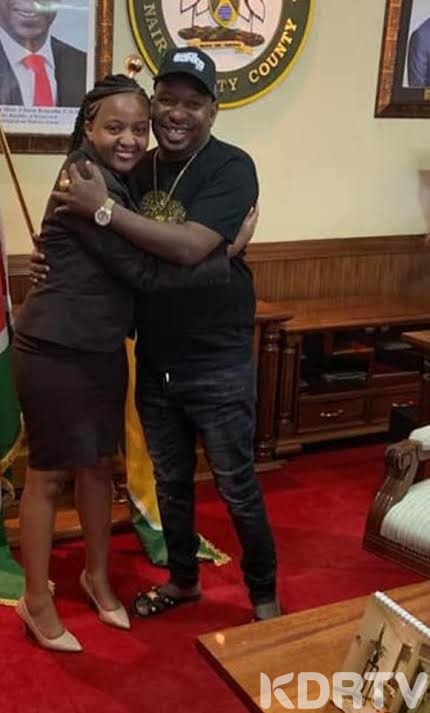 Embattled Nairobi Governor Mike Sonko was in the company of sassy and curvaceous University of Nairobi Student leader Anne Mvurya during his dramatic arrest in Voi.

Sonko was arrested on Friday last week following a warrant issued by DPP Noordin Haji. The governor is facing several counts of corruption, misuse of office and money laundering.

The Nairobian, has now revealed that Anne Mwangi Mvurya, the first female student leader of UoN was in the governor’s vehicle.

According to an officer who was in Voi on the fateful day, Mvurya was clad in a hoodie and a cap. The unnamed source also claims that she looked nervous and pregnant. Is she pregnant for the governor?

The Nairobian, which is owned by Standard Media Group, further claimed that Mvurya and Sonko were both held at the Voi Police Station before being airlifted to Nairobi in a police helicopter.

Mvurya ‘escaped’ from Wilson airport without attracting attention as Sonko was whisked in a waiting police car.

The student leader refused to comment on the allegations that she was with the governor on the day he was arrested.

She however lamented about the way Sonko was arrested. She said police didn’t need to torture and humiliate him.

Later, a man purporting to be Mvurya’s lawyer called the journalists doing the story and warned them against publishing it because he would personally pursue them.

Sources close to the governor have confirmed that the two are dating and that Sonko could have bankrolled Mvurya’s campaigns early this year.

Mvurya is also believed to be living life on the first lane and drives a 4-wheeler.

She has been spotted in Sonko’s private office on several occasions.