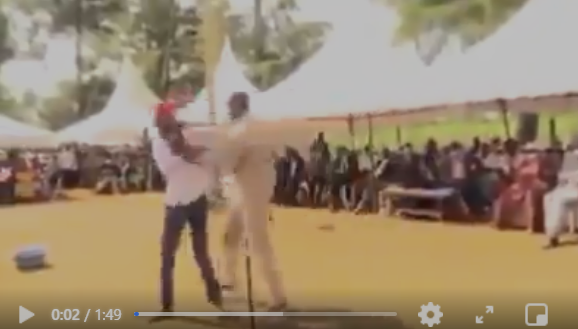 There was drama at a funeral in Kimilili constituency during the weekend after a bodyguard attached to Bungoma Governor Wycliffe Wangamati attacked Kimilili MP Didmus Barasa.

Barasa was cut short by the bodyguard who stormed the stage, choked him, shoved him off and took the mic after he accused Wangamati of failing to initiate any projects in Kimilili constituency.

“The worst mistake Bungoma made was electing Wycliffe Wangamati as governor. The man is a total failure,” Barasa said.

In a viral video that has been doing rounds on social media, the scuffle led to tension which led to the crowd roughing up the guard.

Barasa claimed that all the governor was doing was going around bragging about projects that were not initiated by the county despite Bungoma getting Ksh 12 billion every year.

The governor wasn’t present at the funeral. Mourners pounced the bodyguard following the attack and beat him up squarely to a point Barasa begged them to stop. He had to intervene when the crowd ignored his pleas.

In a phone call with the Star Newspaper, Barasa accused the bodyguard of being primitive. He also claimed Wangamati and Health chief officer Patrick Wandili have paid youths to harm him.

“This kind of politics is retrogressive and primitive, everyone should be allowed to say what they think, and the remedy is replying, not violence,” he said.

Wandili, however, denied the accusations saying that he wasn’t even in the funeral.

“Neither myself nor the governor were present during the funeral. I wonder why someone should blame us for such theatrics, criminal liability isn’t transferable,” he said.