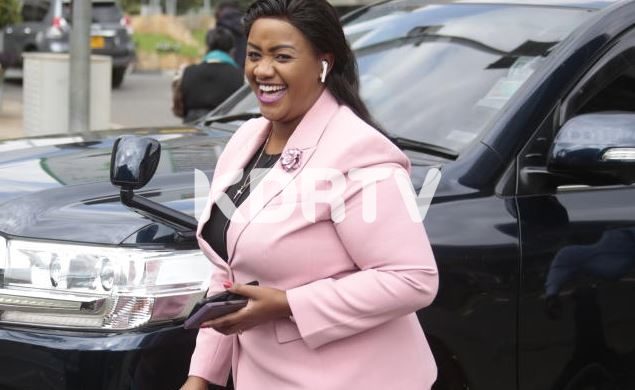 Addressing the media on Wednesday, Waruguru said that she has been away from the media but she’s aware of the speculations.

She knows Jubilee has seen a massive exodus lately but asked her supports to wait till she makes an official announcement.

“There has been a massive exodus from the Jubilee Party and I have seen speculations from the members of the public asking whether Waruguru has moved to the ‘wheelbarrow’ side,” she said.

READ ALSO: READ ALSO: Don’t Take Me To Any Police Station, Police Will Kill Me- Caroline Kangogo Speaks From Her Hide Out

“My answer to their speculations is relative, every serious politician, you listen to your electorates. I am on my own. My bosses are the voters and the people of Laikipia.”

“Very soon, I will be making an announcement telling the country and even my party and the voters in Laikipia County who are residing in diaspora what my decision is, but I will say this, I do not want to be right or wrong, but I want to be on the side of God, and the side of God is where the people are. The voice of the people is the voice of God.”

The MP said that currently, she belongs to the Jubilee party even though things haven’t been rosy. She urged Jubilee’s leadership to get their house in order.

“I am calling upon the Jubilee party leadership, that if you still intend to use Jubilee as one of the major parties that will be used particularly in this region, then something must be done,” she said.

“The majority of the people still believe that Jubilee has been overtaken by a number of problems.

“In Mt Kenya, people make their decisions very early. I would tell you that Jubilee is in limbo. We have been having our own problems, and those problems are dusted. They have not been addressed or articulated.”