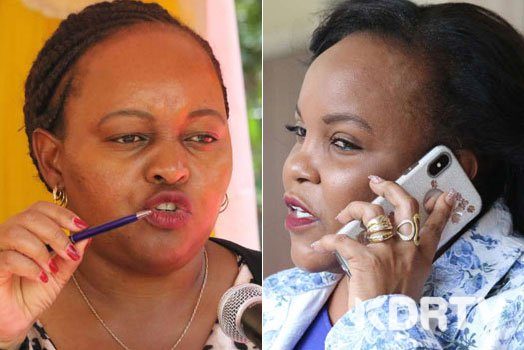 The governor for Kirinyaga Anne Waiguru will be wedding the popular city lawyer Kamotho Waiganjo today.It is believed Governor Anne Waiguru has invited a number of high profile guests including politicians to be at today’s event. However, missing in her invitation list is her political rival Wangui Ngirici.

It is  speculated politics is one of the major reasons the Kirinyaga Women Rep has not been invited to the wedding. Ngirici has been a major headache to Governor Waiguru. She has been rumored to be using her deep pockets to buy MCAs so that they can frustrate the governor from performing effectively.

Just a month ago, she was accused of inciting employees of Kirinyaga Hospital to go on strike. This in turn led to Governor Waiguru dismissing over 100 employees in a single sacking.

Today’s wedding will take place at Kiamugumo Primary school and members of the public are invited to witness Waiguru take her vows.

Even though Waiguru’s husband to be has children with another Nairobi based woman, insiders say the governor is keen on marrying the city lawyer and is upbeat she is finally settling down.

”She is looking forward to this day. She is very upbeat and is in high spirits as she marries the love of her life. We hope it is going to be a successful day, ” said an official from Kirinyaga County Government.

It has not been established yet, whether Waiguru and her spouse will immediately head out on a honeymoon outside the country.

Subscribe to watch latests videos
In this article:Anne Waiguru Wedding